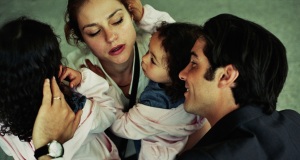 Real-life events have long been a source of inspiration for cinema’s finest writer-directors, and in Our Children Belgian filmmaker Joachim Lafosse adapts a particularly chilling tragic case which made headlines in his home country in 2007. Although a film cannot possibly show the whole truth about such a complex true story, Lafosse is trying to provide something here which he feels was missing in the media’s sensationalist treatment of the case. That is, an attempt to understand the incomprehensible: how a seemingly happy wife and mother, committed an unimaginable act of infanticide, and without merely reducing this woman to a “monster” which is a total dead-end to any possible discussion.

In the film, the woman is called Murielle and is portrayed by Émilie Dequenne, whose performance here is as intense as her memorable debut in Rosetta (1999). She falls in love with Mounir (Tahar Rahim), a handsome young man of Moroccan origin, who lives with his adoptive father Dr Pinget, a GP played by Niels Arestrup. Pinget took Mounir from his Moroccan family 20 years prior, to offer him a better life in Brussels.

Mounir and Murielle get married and start a family; all goes well but there is one small catch: they live with Pinget in a house he paid for and, despite Murielle’s protestations, Mounir refuses to leave the man to whom he feels so indebted to. Slowly this takes a strain on the family, and through an elliptical narrative we learn that Pinget’s well-meaning actions are in fact stifling, and many question marks hover over his relation to Mounir’s family.

Rahim and Arestrup team up again after their mentor-protégé relationship in A Prophet (2009), a past resonance which only adds to the strangeness of the bond between their two characters here. Mounir is trapped by the debt he feels he owes to Pinget, and it is a heavy weight to bear which he and his family never manage to free itself from, neither economically nor psychologically. Things are particularly hard on Murielle who becomes victim to depression and breakdowns, leading to the harrowing finale which is shot in the least sensationalist way possible – of course anything else would have been inappropriate and the restrained tone is very much to Lafosse’s credit.

From the very start, Lafosse sets up the film not as the suspenseful melodrama it might have been in the hands of a lesser director, it’s not about what will happen next but more an investigation of how and why it happens. His mise-en-scene prevents us from getting too emotionally close to the characters, as they are usually filmed in medium-long shots, with the framing often out of focus, or obstructed by walls or doors. This works in allowing the spectator to think over these events with a cool head, while also giving a claustrophobic mood which enhances the idea of Murielle being trapped.

The direction evokes contemporary directors like Haneke, or Lafosse’s countrymen the Dardenne brothers, and Lafosse, just 38, is a very talented potential successor to such masters. But he doesn’t quite match their precision for the time-being, as certain parts of the film repeat themselves too often while leaving other angles unexplored – for example, the possible romantic affection Pinget might have for Mounir is barely scratched at. However, Our Children achieves its intentions, sensitively showing how everyday pressures can accumulate and boasting very impressive performances, especially from Dequenne who won Best Actress in the Un Certain Regard strand of Cannes 2012. Not an easy watch, but a very accomplished work.

3 thoughts on “Review: Our Children”