Only God Forgives. Booed and panned at Cannes, eagerly awaited by fans of the cult hit Drive, and met with divisive love-hate reactions since its release… The latest from Nicolas Winding Refn, 2nd most famous Danish auteur-provocateur around (hard to compete with Lars on that front), is a strange animal that seems to knowingly toy with our expectations of what we thought it would be. As living proof of this, it provoked one of the earliest walkouts I’ve ever witnessed at my local multiplex, where one fellow was so distressed to see the opening credits sequence was in Thai that he decided he’d had enough…

Of course that particular audience member is an exception rather than the rule, but it highlights the first surprise in store for those hoping this would be Drive 2. We’re in Bangkok, or at least Refn’s exoticised neon-lit version of it, and most of the film is in Thai. Out in Bangkok and running a boxing club which serves as cover for a drug-dealing business is Julian, aka Ryan Gosling, who played an ultra-cool quasi-silent hero with a rigorous moral code in Drive (he could have come straight out of a Melville flick, just think Delon in Le Samourai). Here, he is even more quasi-silent – he must barely have a dozen lines and if he was any more expressionless he’d be a statue – but none of the other things apply… he is unsure of himself, gets belittled by his own mother, and as the film’s central fight scene attests, is not even a particularly good fighter.

As for a moral code, he is far too dictated by his family and criminal organisation to assert one. So when his older brother savagely rapes and kills a young prostitute, and is then murdered by the girl’s father, Julian’s foul-mouthed ex-mafia-trophy-wife mother (Kristin Scott Thomas in an unrecognisable role) lands in Bangkok demanding immediate and blood-thirsty revenge be carried out by Julian. However they’re not counting on Chang (Vithaya Pansringarm in probably the film’s best performance), the mysterious Thai cop who is on the case. If anyone is the incorruptible, unflinching Melvillean hero here, it is certainly Chang. More than that in fact, he is essentially the “God” of the title, omniscient and all-reaching in his judgment and punishment (all the cross-edits involve him as if he is seeing, or at least aware of, all the other parallel events), and as it happens he is not all that forgiving.

This brief summarising of the plot may give the impression this film is anchored in a revenge story, but it’s really not particularly plot-based… Only God Forgives meanders at a pace so static and contemplative that it sometimes feels like a slideshow; the characterisation is most politely described as economical; and it often indulges in scenes with little to no narrative motivation. If you’re expecting a sound plot, you’ll leave with plenty of questions exposing glaringly illogical plotholes. But this is because the film’s raison d’etre is not the rather simplistic and ultimately unsatisfying storyline. Rather it’s the look, the mood, the atmosphere, the neon-red-suffused sleazy Bangkok backstreets and brothels, the intensely brooding stares on the characters’ faces. All these elements give the sense that Refn was not going for realism, but something more subjective, perhaps representing Chang’s perspective, perhaps Julian’s.

Could all of these things have been attached to a more coherent plot, without losing too much of their effect? Probably, but Refn is far from the first director to go for such an expressionistic approach. With its dreamlike logic, jarring use of strange effects on the sound design and even a surreal deadpan karaoke scene recalling Dean Stockwell’s famous moment in Blue Velvet, Only God Forgives often channels David Lynch, another filmmaker often lax with plot. Like in Lynch, there’s plenty of Freudian references, notably in Julian’s oedipal complex towards his mother (at one stage he even literally tries to re-enter the womb), but Refn has been too shallow and indulgent to make a film as resonant as any of Lynch’s best. He has assembled many disparate things which he simply seems to find “cool”, in a setting he finds exotic. On top of Lynch, passages here and there recall the abstractness of some of Michael Mann’s thrillers, while the tracking shots in corridors (and again the sound design) bring to mind Kubrick’s The Shining.

A film becomes a really great piece of art when all its separate pieces combine to form something greater than the individual parts, but here it all feels too disjointed and entirely reliant on atmosphere. Yes, Refn is a talented stylist and the sound and visuals can leave you spellbound if you really get into this (ex-Red Hot Chilli Pepper Cliff Martinez’s pulsating electronic score also deserves a mention). But the final product is too superficial, the stylistic parts need to be reinforced by thematic content and narrative but these are either non-existent or incoherent. In the end Only God Forgives is neither the disaster nor the masterpiece rival camps have claimed it to be, it’s merely an incomplete film abounding in style but sorely lacking in substance. 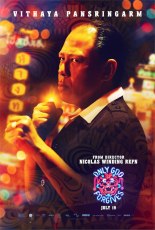 One thought on “Review: Only God Forgives”