“It would be difficult for me to make a film about contemporary America today. We live in such dark times and we have gradually lost our open spaces. We always had hope, the illusion that there was a place where we could live, where one could emigrate and go even further. Wilderness, this is the place where everything seems possible, where solidarity exists – and justice – where the virtues are somehow linked to this justice.”

“Nostalgia is a powerful feeling; it can drown out anything.”

Traits: A philosophical, literary sensibility. Epic, cosmic and elemental themes of nature, and fate, and Man’s relation to them. Use of unconventional voice-overs to filter his oblique narratives. Visually stunning and ethereal cinematography relying on natural light.

“One day, while taking a look at some vistas in Dad’s stereopticon, it hit me that I was just this little girl, born in Texas, whose father was a sign painter and who had only just so many years to live.”

So goes one of the diary excerpts read in voice-over by Holly (Sissy Spacek), early in the progress of the killing spree her and her James Dean-wannabe boyfriend Kit (Martin Sheen) go on — a spree rooted in the real-life killings of teenagers Charles Starkweather and Caril Ann Fugate in the 1950s. But as the quote from Holly’s narration suggests, this is really just the springboard from which Malick’s remarkable debut becomes a strange, oblique take on the killers/lovers-on-the-run formula. This is no Bonnie and Clyde nor They Live By Night. The tone with which Malick observes these killers is far from those previous films. It is cosmic, perhaps even anthropological, like Imamura’s films — animals, insects and wildlife preponderate, often in close-ups, as often do the barren landscapes which dwarf Kit and Holly and their twisted American dream. Perhaps this is why the mystery of the film remains intact, no motivation given. These two are animalistic, acting on instinct, and the film shows them coolly, without explaining nor judging.

The closest we get to understanding is of course Kit’s frustration at being a ‘nobody’ in the face of this maddeningly infinite Universe, but naturally he doesn’t have the capacity to express that and nor does Malick make it obvious. The mystery remains instead to be elucidated only by the act of watching this film, the gift Malick gives us of feeling a little of what his wanton, heinous but in the end all-too-human duo feel, that inescapability hinted at by Holly above, the plethora of ’50s pop culture references which only reinforces that inescapibility from the there-and-then which Kit and Holly were born into, or the vinyl record Kit confesses on and leaves for longed-for posterity. He longs to be remembered, to be a celebrity or a hotshot of some kind and transcend his inescapable there-and-then. But still in the end, all Malick makes clear is that murder can never really be explained by facts. (June 2017) 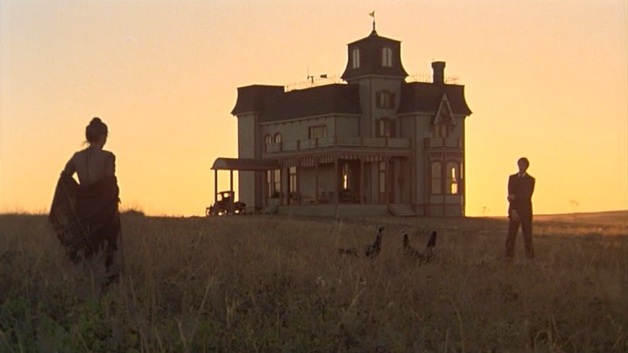 Malick’s second film again pits man against Nature and Fate, with this time quasi-Biblical proportions and even more visually stunning results. Bill (a young Richard Gere) is a worker in 1910s America who heads to Texas with his lover Abby (Brooke Adams) and young sister Linda (Linda Manz), along with thousands of other migrants looking for jobs in the wheat fields. After harvest, the itinerant labourers leave to look for new work and eke out an existence elsewhere, but Bill gets other ideas when he learns the rich and lonely farmer (a wonderfully haunted Sam Shepard) is terminally ill; ambition for a better lot turns his head as it has many before. He convinces Abby to pretend she is his sister and respond to the farmer’s romantic attention towards her so they can stay at the farm and eventually get the land when the farmer dies.

This simple love-triangle motivated by greed and jealousy would be formulaic under the direction of most others, but the vision of philosopher-filmmaker Malick turns it into something transcending its plot limitations. Néstor Almendros’ (and Haskell Wexler’s, who filled in when Almendros had to go shoot a Truffaut film) cinematography boasts some of the most stunning images ever shot. Morricone’s score is tinged with haunting nostalgia. The mood and feel of the period is brought to life with incredible lyricism: the opening montage of real period photographs of working-class Americans looking at us frozen forever in time; evocative shots of insects and wildlife in the fields inserted in between scenes, like in Badlands nature is both lyrically beautiful and daunting in its omnipotent nonchalance; the voiceover narration by Linda which is both poetic and strangely childlike. It all gives the film a scope that is cosmic, somehow encapsulating the mysteries of being alive and having your destiny depend on nature, fate and countless factors you barely comprehend. Malick’s reputation as the most unique of film artists working in the USA was cemented. (June 2017)