Nabil Maleh, another auteur of world cinema we’d know more about if it weren’t for the restrictive nature in which film history gets written. Peerless pioneer of Syrian cinema, he trained in Czechoslovakia, at FAMU alongside Jiří Menzel and the late Miloš Forman, and later spent some years in exile in the US. Still, whenever circumstances allowed he made films in and about Syria. He always remained an independent, in his filmmaking as in his political activism, a maverick whose career reminds us the Arab cinema has had its fair share of free-thinking artists. It’s tempting to imagine that he saw some of himself in the lone rebel protagonist of his landmark debut The Leopard (first Syrian feature to win international festival prizes).

Made in 1971 as Hafez Al-Assad was consolidating his command over the country, the film is set in a Syrian village in 1946, shortly after independence from the colonial French. The agha, administrative bully ruling over the region, relentlessly demands tribute from the villagers on his land. As was the premise of Chahine’s The Land, the harvest has been miserly and eking out survival is tough enough as it is. After protesting that he cannot pay, farmer, husband and father Abu Ali is arrested, beaten and tortured. A hot-tempered larger-than-life character who fought the war of resistance against the French, Abu Ali decides upon returning home that enough is enough. Grabbing his rifle, he kills two of the agha’s soldiers, kisses his wife and son goodbye, and heads into the nearby hills, resigned to the life of a solitary outlaw forever watching his back.

Maleh’s feat is neo-realism, politics and myth all in one. His version of Abu Ali, a real-life outlaw of 1940s Syria fictionalised for this film, is a bona fide folk hero — we catch glimpses of the process of his mythologisation, through word of mouth, each rumour about him getting grander the more it travels. There’s something of the communal ‘bird’s eye’ perspective of a film like Francesco Rosi’s Salvatore Giuliano in the way focus shifts across various characters in connective montages, providing a portrait of the whole community and how all are affected by Abu Ali’s actions. Maleh is interested in the radical, politicised side of this humble peasant pushed into bearing arms, taking on the corrupt regional authorities, through Robin Hood-esque raids, robberies and sheer provocation. In response, the humiliated agha and police forces will spread lies to turn the villagers against him, encouraging them to betray him — a propaganda battle for hearts and minds.

One indelible element celebrated by The Leopard is its rural setting, which thanks to location shooting relays the feel of the real villages, stone houses and mountainous landscapes of Syria’s countryside, its spirit every bit as indomitable as Abu Ali’s. It is also stage to a scene of earthy sensuality surprisingly candid in the context of Arab cinema. For Abu Ali, before being a hero and legend, is foremost a hot-blooded man and his Achilles’ heel is his longing for home, wife and son. He risks trysts in the mountains with Um Ali, and they make love amid the trees and the flow of a nearby stream.

Um Ali herself is no meek housewife — in one tense nocturnal set-piece, bathed in a few swathes of light piercing through high-contrast cinematography, she joins her husband rifle-in-hand for a shoot-out against the agha’s men. Out of love she shares in her husband’s fight, but they are soon separated again and he remains a lone leopard, unwilling and unable to make others join his struggle. Several relativistic scenes suggest that the policemen enforcing the agha‘s brutal regime are themselves no better off than Abu Ali — they are out to make a piece of bread to feed their children, everyone has their reasons. 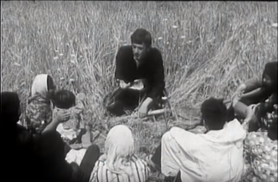 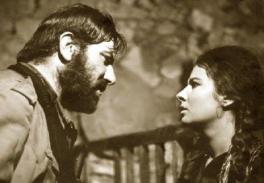 Abu Ali, more than Rosi’s invisible Sicilian outlaw, resembles the charismatic rebels Yılmaz Güney played in Turkish westerns like Law of the Border or the cangaceiros of Glauber Rocha’s films. Like Rocha’s folk hero of mythological proportions Antonio das Mortes, Maleh’s Abu Ali is a legendary, almost Christ-like figure, aggrandised through the use of folk music and poetry. Plaintive elegies and traditional drum beats fill the soundtrack over recurring shots of his sullen face, looking offscreen into the distance, with the crashing waves of the sea just out of focus in the backdrop. Only at the very end of the film do we realise these were flash-forwards to Abu Ali’s final moments, and that Maleh has carved out his own love letter to an ideal of Syria no longer extant.

Maleh’s paean ends in an aerial sweep over the Syrian countryside (Is it the spirit of Abu Ali flying away? A visual tribute to the land?) followed by the silhouette of a mob of villagers marching in unison (the faintest of glimmers of that revolution Abu Ali couldn’t stir while alive). Nabil Maleh’s deep sense of awe and nostalgia towards the rural Syrian lifestyle and Abu Ali’s courage shines through contagiously, but overwhelmingly he was a sad prophet of things to come, knowing the departure of the colonisers only opened the door for new oppressors. Problems for the common Syrian remained the same: a ruthless overlord, the lackeys of those with power hurting their fellow people, communities torn apart, futile resistance and manufactured fear — watching this film amid the current situation in Syria feels tragically cyclical. (April 2018)

The Leopard can be viewed on Youtube with English subtitles here.