“Things like imagination and one’s willingness to believe in the abnormal have all but been eliminated from our daily lives; for all intents and purposes. The end result of which is soberingly bland reality. Which is pretty much what we live in today.“

“If I had a chance to edit live action, it would be much too fast for audiences to follow. In animation, the audience understands this momentum.”

Traits: After starting out as a manga artist and animator on other filmmakers’ projects, Kon established himself from the late 1990s as one of the most imaginative creators of dizzyingly multi-layered animations, typically trompe-l’oeil films which dissolve the lines between fiction, dream, memory, imagination, and reality. Anchoring them are complex but nonetheless accessible narratives, usually centred on female protagonists facing some sort of quest, and mixing genre elements from fantasy, psychological thriller and science-fiction. Though he made only four features and one influential series (Paranoia Agent), his legacy has developed a cult status after his premature death and he has been a direct influence upon the live-action films of Christopher Nolan and Darren Aronofsky, among others. 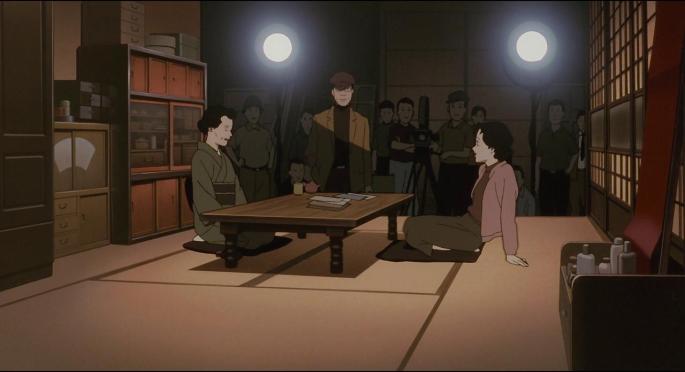 What happens to the memories of a life once it reaches its closure? The total sum of its events, its encounters, its lost loves, where do they all go once consciousness switches off? Do they vanish in the ether, transformed into invisible energy? Or is there another realm, where they might continue to exist in some format? Think of Hirokazu Koreeda’s Afterlife, where life after death consists of a bureaucratic attempt to recreate and store one’s memories into some vast video databank.

In his own typically mind-bending way, Koreeda’s countryman Satoshi Kon tackles similar thematic territory in Millennium Actress, for my money the most profound of his animated features. Kon’s premise does not even need to leave the mortal dominion, for he posits that we already have these self-enclosed collections of life, memories, dreams, desires, and everything in between, available for repeated playback right here on earth. New technologies in the last century and a half have changed how we as a species can visualise and remember our lives, starting with a particular format we’re all rather fond of. They’re called films and, even if they be fictional, they contain fragments from the totality of a lived life long after those people on-screen have passed away. After all, whether we watch James Dean play the rebel without a cause or Gloria Swanson getting ready for her close-up in Sunset Boulevard, we are also watching moments from the lives of Dean or Swanson themselves.

But let’s rewind a little. Millennium Actress was the magnum opus of Satoshi Kon’s densely imaginative but cruelly curtailed career. The great Japanese animator’s second feature (he only completed four before his death in 2010) is an odyssey into the past, into memories of lost love, into Japanese film history, all recounted through the reminiscences of a (fictional) actress looking back on her life and art and regrets. Chiyoko Fujiwara, legendary actress in the Setsuko Hara mould1, retired in her prime and has lived in seclusion for three decades, a hermit’s life which only exacerbates the unresolved mysteries around her decision to quit. Yet, now in the autumn of her life, she has agreed to give an interview to Genya, a persistent documentary filmmaker who as it turns out is himself an obsessive fan (a detail which creates interesting comparisons with Kon’s first feature film, Perfect Blue), and Kyoji, Genya’s cameraman, a far less enthusiastic straight-talker who provides comic relief along the film’s break-neck ride. 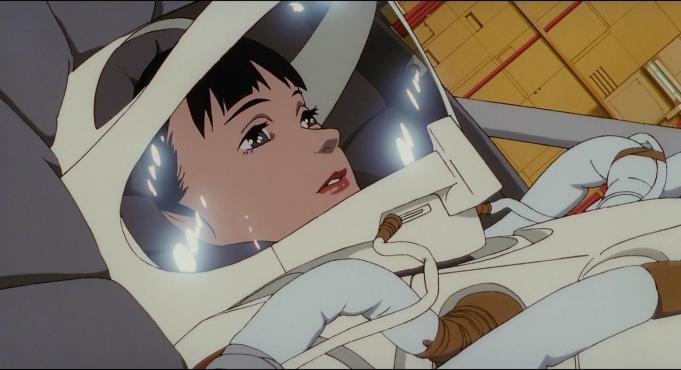 The opening sequence: Chiyoko, and the film, geared for launch…

Millennium Actress is also a film that mirrors in on itself, and begins with a diegetic break-neck ride. The opening sequence is of a woman (actually Chiyoko) about to be propelled into space on a rocket, which we come to realise is a film within the film we are watching (so it’s one of Chiyoko’s movies), which we come to realise is being watched on VHS, probably for at least the hundredth time, by uber-fan Genya (so it’s a recording of one of Chiyoko’s movies). These opening moments already set us up for what happens once her interview begins and her memory speaks, when we ourselves are hurtled into a bewitching kaleidoscope of fiction, memory and imagination all intertwined. What we may first believe are recollections from Chiyoko’s own life reveal themselves to be excerpts from the wide catalogue of films she starred in, leaving us on unsure footing along the tightrope between life and art. The act of remembering, of revisiting these memories like one re-watches old films, and using imagination to freely navigate them, means in a way to fictionalise the past. Memory and fiction cinema merge seamlessly and this is what guides Satoshi Kon’s film.

Chiyoko’s testimony is hence the launchpad for these flashbacks, telling us snippets from her life: she fell in love with a young anarchist painter on the run the from Japanese military, during WW2, and the rest of her life has in one way or another revolved around a decades-long search for this lost love. There’s also a mysterious key given to her by the painter, without telling her precisely what it should open. It becomes a sort of ‘Rosebud’ in the Citizen Kane­­-like puzzle of her life which Genya is so desperate to unlock. This in itself would make Kon’s film a worthy melodrama, with historical interest thrown in through references to Japanese militarism and colonialism. 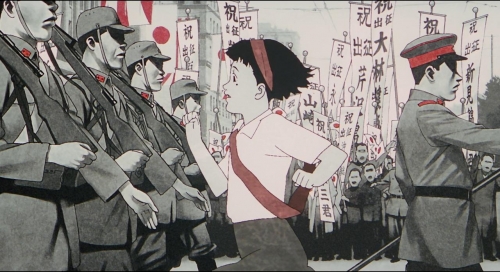 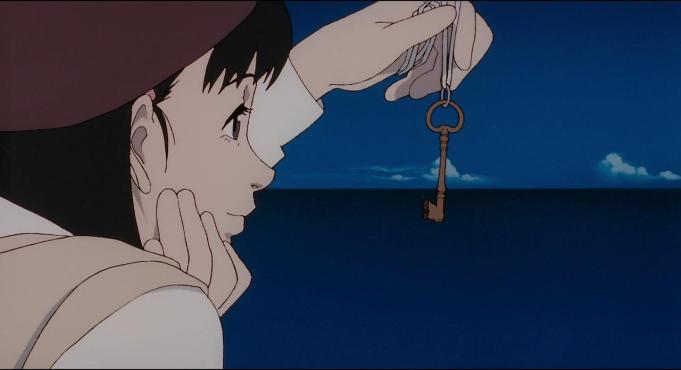 The key: to unlock the mysteries of Chiyoko’s life? 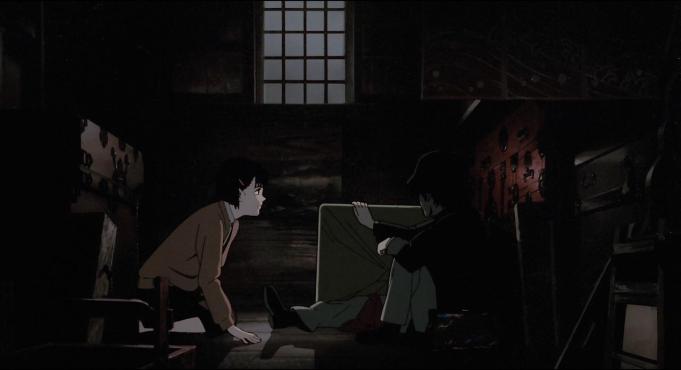 Chiyoko and the young painter she meets during WW2

But Millennium Actress has so many more layers: the flashbacks also become a crash course in Japanese film history, as the various film roles Chiyoko relives, as her bio-filmo-graphy progresses chronologically, form a rough outline of Japan’s film history. There’s a version of Akira Kurosawa‘s Throne of Blood, a typical Yasujiro Ozu shomin-geki, a pastiche of Ishiro Honda’s Godzilla, and so on. If that wasn’t enough, past and present also start to merge in these flashbacks, Genya and Kyoji, like an anachronistic TV crew in one of Peter Watkins’ pseudo-documentaries, cross the line into the flashbacks. They appear and interact with Chiyoko, inside her memories, inside her films. 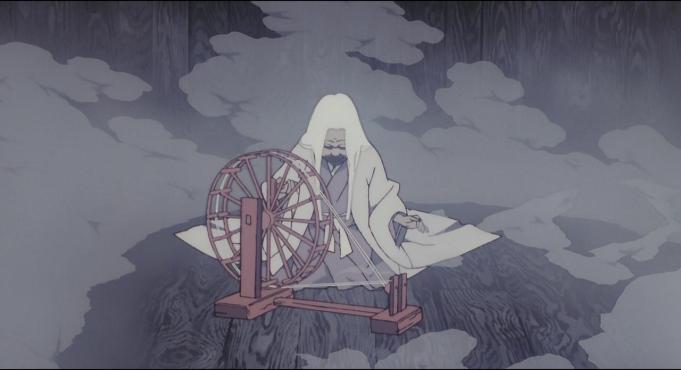 Chiyoko’s memories merge with her film roles: this one a pastiche of Kurosawa’s Throne of Blood 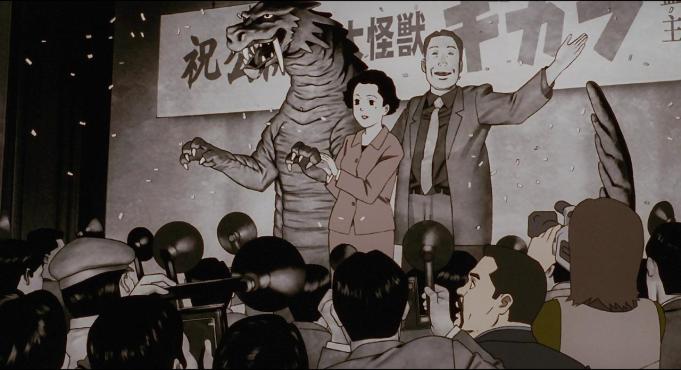 Another of her movie-memories: starring in a Gojira-like monster pic

We thus come back to this metaphor again: the past as something that can be recorded and played back. Memories, life, films, memories of life and films, everything merges into malleable moments Genya and Kyoji can themselves enter and explore, the same way Genya watched (and no doubt mentally projected into) his VHS tapes of Chiyoko’s movies. And this is where the film’s hall-of-mirrors effect between past, present, life, fiction, is perfectly orchestrated by the momentum of Kon’s layer-hopping editing. No wonder the likes of Christopher Nolan are such huge fans of his, Inception, among others, owing a huge debt to Kon. 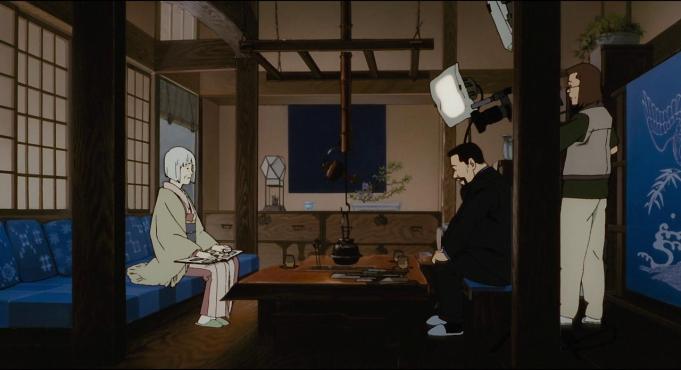 Whether on-set or at home, cameras are a constant presence on Chiyoko…

Ultimately, though, what makes this film more than an empty exercise in storytelling pyrotechnics is the emotional core of Chiyoko. It is the layer of her life story which everything comes back to and which binds the film together. Who really is this woman? Which version of herself, of her many public and private personas, is the true Chiyoko? Where does the actress end and her roles begin? Is this why she finally retired from acting, to work out who she was herself away from prying cameras?

The more we watch, the harder it becomes to distinguish between her film characters and her offscreen life. But the film’s finale hints that she is more than an amalgamation of moments from her life and work could ever suggest. The film begins as it ends, like a cinematic Moebius strip (of celluloid, perhaps) ready to be played all over again. We conclude with the same sequence from the sci-fi movie and Chiyoko the actress, eternally young in her role and about to be blasted into space, just as the present-day retired Chiyoko is actually frail and facing mortality. It’s a wonderfully Kubrickian metaphor for the passage into death, but also for life itself: the last words we hear her speak, like a true Rosebud, make us re-think everything we thought we knew about her. Life as perpetual motion, as a chase and pursuit for its own sake. This is the final note Kon’s film ends on, a fitting one for the magnum opus of an artist who himself was sailed off into the cosmic realm far too early. All we can do now is watch and re-watch his films on playback, like memory-loops from his life and imagination. (September 2021)

1. Setsuko Hara, legendary actress of many Yasujiro Ozu classics among others, retired from acting and public life at the age of 42 in 1962 (she lived until 2015, refusing all interviews).