Purely by coincidence, I notice that I’ve recently watched quite a few films with taxi driver protagonists: Ebrahim Golestan’s Brick and Mirror, Ning Ying’s I Love Beijing, and now this atypical Satyajit Ray film that he only stepped in to direct after the assistant he’d written it for pulled out. When we consider Taxi the recent Berlinale winner by Jafar Panahi, Michael Mann’s Collateral, or that rather well-known Scorsese-Schrader collaboration, we begin to see that cabbie and their vehicle have, as profession and metaphor, been particularly well-served by the cinema. There’s something about the urban marauder looking at the city life through their windshield (itself not unlike a movie screen), while potentially interacting with any of its denizens across the back of their cab, makes the taxi-driver cinematically potent.

In Abhijan though, the taxi belonging to Singhji (Ray regular Soumitra Chatterjee) works on different symbolic levels. Singhji is a proud descendant of the Rajput caste, a once impressive breed of warriors now scattered around India and without any of they bygon prestige. His beloved 1930 Chrysler may be his pride and joy, but it is also a constant reminder to Singhji of what troubles him the most: his ‘lowly’ status. The ancestors he romantically wishes to aspire to, and even hangs pictures of up on his rear-view mirror, had noble horses and commanded admiration. He on the other hand has a mechanical machine and an unglamorous job that others look down on. Singhji is thus torn between his excessive pride over his background and the shame of being no more than a lowly driver himself. 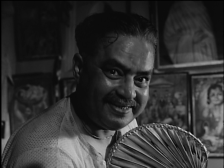 It won’t surprise anyone that the film eventually ends up teaching him the lesson that one’s actions are more defining than ancestry, but Ray takes a long scenic, and never less than engrossing, route to get there. For an unusually melodramatic film by his standards, complete with tautly edited car chases and a fight scene (albeit not the most convincingly staged fist-fight you’ll ever see, but we can blame that on the heat and fake beards), Ray enriches what would have been a conventional film into a rich character study. The narrative is meandering in the best way, taking enjoyable detours with events that don’t have ‘Crucial Plot Development’ marked all over them. The film also adds up to a convincing portrait of the diversity of life near in North-East India, taking in a host of multi-ethnic, multi-religious and multi-caste characters orbiting around Singhji, some good, some bad. There’s a pair of women, one a Christian teacher whose brother Singhji knew as a boy, and the other a forced prostitute, played by the beautiful Waheeda Rehman, who in their own way will afford Singhji a chance at redemption. This after his temptation by the threateningly malevolent Sukharam, who sinister smile and portentous gun-shaped lighter, are already signs that Singhji may be better off rejecting his propositions for making quick money. Then there’s also Singhji’s sidekick Rami, played by another favourite of Ray, Rabi Ghosh, who offers plenty of comic relief and monkeying around along the way, part of Ray’s easy-going narrative mode.

A man of many talents, Ray also composed the fantastic rhythmic score himself for this. His mastery is indicated throughout by the way he has raised a formulaic plot, taken from a pulp piece of fiction, and made it into an entertaining, engaging character study. As is usually the case with Ray there’s a ‘message’, but it’s never didactically over-emphasised, and there’s some touches which it’s easy to tell he added in himself, which were not present in the source text. Most significant are the two large rocks in the badlands outside the town, which recur twice throughout the film, and where the action takes place. We are told their meaning, and that the locals have attributed to them the names of ‘Uncle and ‘Nephew’, making them redolent of the symbolic weight handed down through the generations, be it the burden of Singhji’s caste background or the intolerant prejudices society continues to foster. It might not be Ray’s greatest film, but if Abhijan is only ‘minor Ray’, as most scholars deem it, then no doubt his filmography has many more treasures left for me to discover. 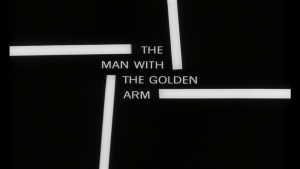 The Man with the Golden Arm (Otto Preminger, 1955)

Determined to show off his acting credentials after losing out the part of Terry Malloy to Marlon Brando, Frank Sinatra delivers a performance of Method-esque intensity as Frankie Machine, a likable junkie just out of rehab and set on going clean in order to become a drummer. Tackling the topic of drug addiction may seem blase today, but in 1955 it was bold indeed and Preminger was pushing the boundaries set by the now antiquated Hays code of moral guidelines, and helped tear them down altogether. The word ‘heroin’ is never actually used (only ‘score’ or ‘fix’) and never do we quite see a needle, but Frankie being presented as an all-too-human sufferer, a victim of his addiction, is what makes The Man with the Golden Arm a groundbreaking Hollywood treatment of its theme. 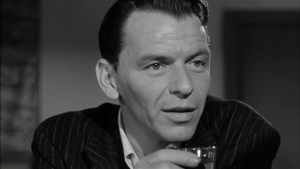 Ol’ Blue Eyes aside, it’s the incandescent Kim Novak and her mix of strength and vulnerability who steals the show. Even in her scenes opposite Sinatra, your eyes gravitate towards hers, scintillating with emotion and intelligence. It probably doesn’t hurt that she’s such a beauty too, a short-haired blonde exuding authentic feeling as well as sex appeal – much like another screen icon who’d also become a Preminger muse just a few years later, Jean Seberg. 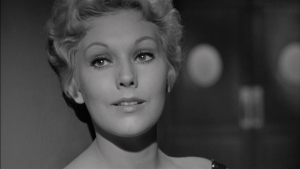 Novak plays Molly, a positive influence on Frankie’s life, in some ways his good angel. The two are in love, but must remain apart due to Frankie being tied to Zosh, his infirm wife now wheelchair-bound due to an accident for which Frankie feels responsible. In contrast to Molly, the needy, unreasonable Zosh is a drag on Frankie’s mental state, consuming him with guilt, and offering no encouragement in him or his hopes for a new start in life. When he relapses, it has as much to do with him needing escape from Zosh’s negativity, as his frustration in not finding a drumming gig. Molly and Zosh are like the angel and devil on either side of his soldiers (as seen in countless cartoons though the archetype itself is taken from a Central Asian legend), enacting the tug-of-war that is his moral dilemma.

Usually, a central character in the midst of an internal conflict, and a host of supporting players orbiting around him representing different facets of his tormented personality, are signs the theories of our old friend Sigmund Freud are of potential use. Indeed, and even more so than was the case for the comparable schema of characters around Singhji in Abhijan, we can fit a Freudian blueprint on Man with Golden Arm. Frankie is the conflicted ego, on one side pulled towards the characters representing the super-ego’s order and righteousness, namely Molly and his affable but simple-minded sidekick Sparrow. Sparrow is his Jiminy Cricket, his conscience (not unlike Rami is to Singhji in Abhijan), the one whom he’s most ashamed to face at his lowest ebb. On the other side, Frankie is drawn in by the characters representing the id, tempting him to sink back into his base desires so they may better control, and profit from, him. Zosh fits into that category, as do two slimier characters: Louis, Frankie’s supplier, and Schiewka, owner of an illegal gambling den who pays Frankie to deal his card game. Both exploit Frankie, but with different strategies, like a good cop, bad cop of temptation into self-destruction. Schiewka is aggressive and bullish, but Louis, the more sinister of the two, is slyly sophisticated in the tricks he uses to lure Frankie. The 1950s was the decade when Hollywood went full Freudian, and this movie can be read as a fascinating exemplar of this. 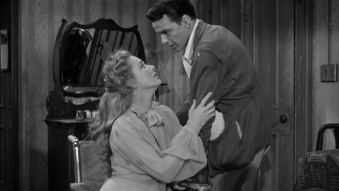 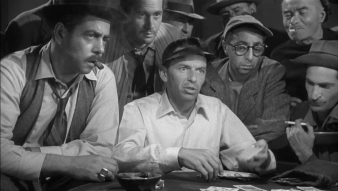 The cast of supporting parts never feel too schematic though, thanks to a string of fine character actors. That said, I’m not sure the finale hit the right tones for me. The characterisation of Zosh is slightly clumsy because, as tragic a character as she is and though there is ample room to empathise with her, the film tries too hard to make her unlikable in order have us siding with Frankie and Molly.

In any case, the film oozes with the aroma of vintage Hollywood, not least for its Saul Bass credits and jazzy Elmer Bernstein score. Preminger’s mise-en-scene and fluid mobile camera, sweeping through the sets rather than relying on cuts, are also notable. One knockout scene, of Frankie’s first relapse, epitomises Preminger’s strategy: the camera tracks right into a close-up of Frankie’s eyes twice, once before and then after his fix. His pupils are first massively dilated and then reduced to a dot when his craving has been satisfied, with Bernstein’s brass notes swelling accordingly. 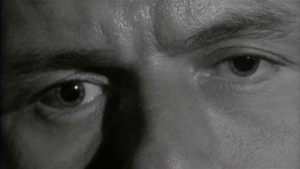 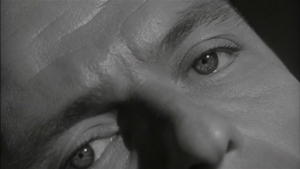