A Thousand and One Hands

Amid the hustle and bustle of a new morning in the souk of Marrakesh’s old medina, an angry old man rants, to nobody in particular: “Work idlers, if you want progress here!”

Only later in the film will we realise this irate wanderer, whom we may have first dismissed as an outcast a few marbles short of a full set, is actually a variation on the wise fool trope. His words ring with bitter irony as we cut to a work-camp where children and women tirelessly fleece and thread wool. Theirs are the thousand and one hands of the title. Next door, Moha and his son Miloud dye the wool into bright primary colours so it can be made into the beautiful rugs of Marrakesh’s carpet industry. This opening montage of images, sounds and local music, in which no dialogue is spoken but that of the angry rambler, reels off like an artisanal ode to colour in the realm of Zhang Yimou’s Ju Dou or Mohsen Makhmalbaf’s Gabbeh.

Then, twenty minutes in, the most jarring of cuts moves us into the story of Jamal, a Moroccan businessman who owns the carpet factory and lives in an opulent villa with his beautiful French wife Nadine. We may as well have moved to another planet, so different is this world of seventies bourgeois fashion and inane cocktail parties, of poorly post-dubbed sound and TV soap opera dialogue. Souheil Ben Barka has nested one story into the other, justifying the film’s ironic Arabian Nights-inspired title, and will move us back and forth between the two until they finally meet in a violent climax. Behind the beauty and colour of the rugs, of whatever simple exotic and aesthetic allure the opening may have had, lies a chasm of inequality and injustice. These two different worlds, of a dirt-poor family of workers who literally break their backs to eke out a living, and of a wealthy industrialist who makes his profits off of their sweat, co-exist in Morocco as gratingly and discordantly as they do in this film, which feels more like two films in one. 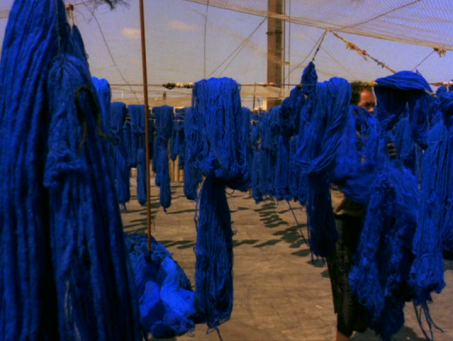 That angry wise fool appears again, marching with gusto through fields and deserts now, shouting although there’s nobody around, “You’re all turncoats, may God’s wrath fall upon you!”

Morocco, independent since 1956, remained a country of stark inequalities under the heavy-handed rule of King Hassan II and in which there was little room for a serious national cinema. Unlike its larger neighbour Algeria to the east, which made big-budget epics about its revolution like The Opium and the Baton (Ahmed Rachedi, 1969) and the Cannes-winning Chronicle of the Years of Fire (Mohammed Lakhdar-Hamina, 1975), Morocco took longer to build a film industry. Souheil Ben-Barka was one of its pioneers, returning to the country in the early 1970s after having studied at the legendary Centro sperimentale of Rome and worked as assistant on Pasolini’s Gospel According to Matthew and Oedipus Rex. This film marked the feature debut of his directorial career, which would ambitiously move onto political thrillers tackling the transnational petrol companies (The Oil War Will Not Take Place) and denunciations of apartheid-era South Africa (Amok). In 1986, he became director of the Moroccan Cinematographic Centre, and today in his 70s he continues making films.

An indefatigable soldier of Morocco’s national cinema he surely is, the ambition of Ben-Barka’s films perhaps outweighed the means at his disposal. Certainly, Thousand and One Hands is anything but subtle, although there’s no reason it should be. After Moha injures his back on the job and becomes bedridden, Miloud is left with the fate of the entire family squarely on his shoulders. He tries in vain to get medical attention for his father, but doctors refuse to make home visits. On a daily basis he seeks an audience with Jamal, but no help is forthcoming there either — all doors simply shut on his face. Meanwhile at one of Jamal’s pool parties, and extending the film’s theme of the exotic beauty of Morocco concealing its injustices, an enraptured Nadine waxes lyrical about the entrancing allure of the local colours. Finally, Miloud, left with no alternative, breaks into Jamal’s villa, but only finds Nadine and, in a fit of manically-edited rage, strangles her in a futile act of self-destructing desperation.

Our last glimpse of the roving, rambling wise fool, now having reached the sea as if there is nowhere else left in Morocco for him to go, verbalises the film’s anger in a final furious rant, to himself but to all of Morocco too: “What have you done since the French left?! Bought yourselves new cars?!”

Ben-Barka’s film fits tidily into the global zeitgeist of a nascent third world cinema in the early 1970s, which had begun with the Latin American anti-colonialist cinemas of the late 1960s — especially the Third Cinema movement, to which the case could be made this film belongs. It also seems likely that in his clash-of-two-worlds narrative, Ben-Barka took some inspiration from Tayeb Saleh’s classic of post-colonialist Arab literature, Season of Migration to the North, another tale of Orientalism and cultural hybridity. Angry but justifiably so, ambitious but conflicted, mixing the visual splendour of Eastmancolor and impressive editing rhythms with the technically lacking post-dubbed dialogue, this is a film of contradictions about a society of contradictions.

One thought on “A Thousand and One Hands (Film)”