Across so many different films, from so many parts of the world, summer, this season of fullness and freedom, has been evocative of fateful fleeting moments, of youth, of vacation time, of going through rites of passage after which you’re never the same again. Think of the romance in Luca Guadagnino’s atmospheric charmer Call Me By Your Name, or of the Czechoslovak 1960s classic The Sun in a Net in which teenagers idle the summer holiday away. Think of how many films stage summer as the time when young people first face the more ‘adult’ realities of death and mortality: Hou Hsiao-hsien’s A Summer at Grandpa’s (1984), Hayao Miyazaki’s My Neighbour Totoro (1988), or Carla Simón’s Summer 1993 (2017). It’s as if in that special moment, in between school years, when intense new memories are being formed, appears the right time to learn lessons of life, and death, which cannot be obtained in the classroom.

Shinji Somai’s unfairly forgotten 1994 coming-of-age movie The Friends fits in alongside this company. Three Japanese primary school boys, each marginalised and bullied at school for being slightly different from the rest, and hence all the tighter in their bonds to each other, spend their summer vacation befriending a reclusive old eccentric. It all begins with a newfound obsession with death (one of the boys just lost his grandpa, while another has a missing father); this strange concept, that these seemingly eternal and carefree days they are living will one day expire, draws them to watching this old man who lives in a rundown house on the corner. Walking from school, they regularly see the unkempt jungle of his his dilapidated home’s back-garden. All kinds of rumours have circulated about this grouchy, hermit-like man who never leaves his house or interacts with anyone. With a mixture of macabre curiosity and trepidation, the boys begin breaking into his garden and spying through his windows, expecting and waiting for him to meet this intangible phenomenon called death, since after all in their minds that’s what old people are supposed to do.

The old man played by Rentaro Mikuni, pulling off a gag worthy of Toni Erdmann…

You can guess what happens next: the old man, played by Rentaro Mikuni (veteran actor of films by just about every great post-60s Japanese director), turns out not to be an ogre after all and an unlikely friendship is formed. The boys, clearly getting little joy in their homes (we very rarely even see their parents), spend most of the summer hanging out at the old man’s place, eventually deciding to spend their school break giving his house and garden a complete makeover. It’s a project that thankfully never lets the film descend into overly mawkish territory, and binds its various themes of inter-generational relationships, transition and change, life and death, and the cycle of the seasons (especially in the beautiful final sequence).

Before then, though, the film acquires another dimension, as we necessarily come to know the recluse’s backstory. His past is tarnished by the guilt of an incident during his days fighting for the Japanese Army in the Pacific War, a tragic anecdote recounted almost matter-of-factly by Mikuni to the boys one night, while outside a typhoon provides all the atmosphere. From hereon, the boys acquire a new mission: to reunite the old man with the family he lost after being rejected upon his post-WW2 return to society (and here we get about as close to a critique of Japan’s war values as would be allowed in a mainstream Japanese film). 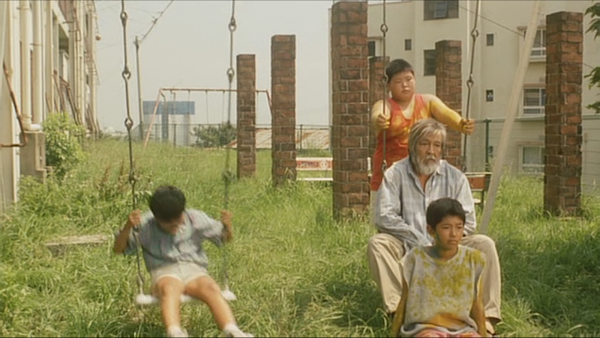 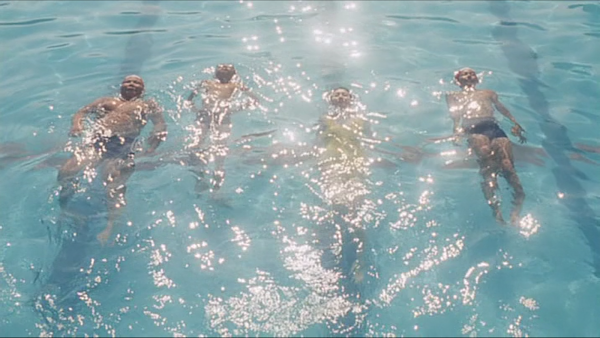 The Friends maintains a charming tone of a casual if eventful summer through a gentle guitar score and luminous, green-heavy cinematography

The rest of the film thusyears for a balance between poignancy and sentimentality, mostly getting it right, largely thanks to a casual gentleness of tone that makes us feel nostalgic for this summer even as it unfolds before us. The luminous cinematography by Noboru Shinoda captures lush greens and summer light to keeps things nicely naturalistic. The acoustic guitar soundtrack by the Brazilian-born Assad brothers adds just enough bittersweetness to this summer which the boys know, even whilst they live through it, they will never forget. The most touching moment is then saved for last, that final sequence mentioned before, an almost abstract montage of still images of the home and garden relapsing back into uncared-for ruin as autumn and winter follow, while on the soundtrack we hear audio flashbacks of what was an unforgettable summer. Now summer is gone, human presence is drained out of the house, the cycle of nature inevitably undoes what has been done, but the memories remain. (September 2021)