“Let one hundred flowers bloom, let one hundred schools of thought contend” proclaimed Mao Zedong in 1956, inviting his citizens to air any grievances with national policy and steer the Chinese Communist Party back on track through feedback. This became known as the 100 Flowers Campaign, a sort of nationwide spring-clean. Dissonant voices, newspapers, students, workers, religious groups, committees, wall posters, all had their say, encouraged to do so as civic duty. In practice however, the Chairman soon realised that criticism of the party and government – that is to say, of himself, for he was the party – was not to his taste. In a typically slippery U-turn, Mao now claimed the campaign had been a ploy to draw out socially dangerous elements like snakes from the grass, and all who’d accepted the official invitation to offer feedback were to be punished. The backlash saw over 400,000 so-called ‘rightists’ and ‘enemies of the state’ sent for ‘re-education’ in labour camps between 1957 and 1961, no matter how small or well-meaning their comments had been.

The 100 Flowers Campaign itself, and the wave of arrests it sparked, have previously featured in Chinese cinema – in Zhang Yimou’s To Live (1994) and Tian Zhuangzhuang’s The Blue Kite (1993) for example. But the actual misery inside the labour camps had never been shown. That is, until The Ditch, the 2010 film by independent Chinese director Wang Bing.

Wang is among the foremost documentarians and filmmakers to have emerged from China this century. His stature owes much to his mammoth 9-hour long debut, chronicling a decaying factory town, Tie Xi Qu: West of the Tracks (2002). As evidence of its almost-immediate entry into the canon as a seminal film, it came in at number 17 on last year’s Sight and Sound Best Documentaries poll, and was voted 202nd greatest film ever by that same publication’s 2012 poll. Wang’s film-making ethic and philosophy is built around a desire to observe the world and immerse us into his vision of it. He roots his documentaries in the everyday experiences of his characters, which he unassumingly documents in long, unstylised takes.

Probing Chinese history has also long been a major preoccupation for Wang. In Fengming: A Chinese Memoir (2007) he depends, for the three-hour duration, on the fascinating oral history provided by the elderly He Fengming recounting the tumultuous decades she lived through. Tie Xi Qu itself was haunted by a forsaken past, with its portrait of the ruin ravaged on an industrial town, formerly a pride of Maoist workers’ China but now a graveyard of factories. While in the 16-minute short Brutality Factory (2007), his first foray into fiction film-making, Wang re-enacted the persecution and humiliation of a ‘struggle session’, a form of public trial-by-bullying all too common during Mao’s reign.

Which leads us to his most direct exploration of history yet: The Ditch (2010), also his first feature-length fiction film. What’s interesting is how it allows the intersection of a performed, scripted narrative with Wang’s own documentary tropes. There’s no score, no artificial lighting, no voiceover, and it’s filmed with the same handheld digital camera aesthetic, propelled by understated movements and compositions, which provide a stark beauty to his previous films. The Ditch is set in 1960 and depicts a few weeks in Jiabiangou, one of the forced labour camps, near the Gobi desert. A fiction film it may be, but Wang undertook years of factual research and gathered testimonies in person from the few remaining survivors (over 2500 of Jiabiangou’s 3000 inmates perished on site, most of famine). For even greater authenticity, it was filmed on location, secretly – there never was any hope of a film dealing with such a taboo topic obtaining official permission, so Wang circumvented that avenue altogether. 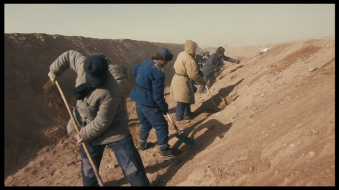 Most recognisable of all in terms of Wang’s style is the unflinching documenting of quotidian life within the camp. Through a handful of core stories and characters, the repetitive, futile nature of their work, the meager lodgings, fatigue, mental exasperation and most of all hunger, are revealed. This was the time when one of the worst famines to have hit mankind was setting in as a result of Mao’s disastrous economic policies, and these wretched prisoners were among the last in the country to have food trickle down to them. They are served no more than a few spoonfuls of gruel, on a good day. Sheer hunger in its purest state is shown; these ghost-like starved men resort to eating rats, picking grains out of vomit, and even cannibalism, just to keep drifting on survival auto-pilot.

But the film is truly affective because it cements this desperation through the stories and backstories of these men, adding a sense of dignity to their battle to survive. One ex-academic is here only for a matter of semantics; his suggestion that the terminology ‘dictatorship of the proletariat’ should be altered to the more inclusive ‘dictatorship of the people’ was enough to deem him a dangerous reactionary. In the paranoid nightmare of Maoist totalitarian China, one word out of turn was enough to get you rubbed off the map, and rip apart a whole family.

We see this when another man, slowly dying, feels he won’t survive in time for his wife’s visit and begs a cell-mate to hide his body so she can take it away for burial when she arrives. Later, the corpse is found by the warden and buried in the desert, before the wife arrives, only to be devastated by her loss and frantically search for his unmarked shallow grave amid the horizon of dusty wasteland. Her harrowing pain borders on melodrama but is undercut by the film’s documentary-realist style. Documentary techniques have been used for fiction films at least since Italian Neo-realism, but Wang brings this approach into the digital age. The austere naturalism, and the striking HD look especially, are not usually associated with recreations of the past.  The time and place are brought back to life cinematically, in an original

way, and it makes the pain all the more tangible, in part because it’s not dulled down by clichéd tropes.

One question hovering over all this however, is does China itself want to hear about this painful past? Do they want to be reminded? According to Wang’s own pessimistic prediction, it will be at least another 30 years before his film is allowed to be shown in his home country. All he can continue to do is cast light (and his trusty DV camera) on this darkness, providing some form of memorial for those who struggled through it, as well as a topography of the scars running across his nation’s history.