Form: Three-part omnibus film, each part directed by one of three different directors.

During the 1960s and ’70s, Taiwan underwent one of the fastest economic growths in the world. In just two decades, it underwent a vertiginous modernisation from a largely agricultural society to an industrialised, high-tech one, with metropolitan centres like Taipei. This radical transition brought a sea-change in lifestyle, traditional culture and value systems; the economic miracle, built as it was on economic and political support from the US, and on free-market export of consumer products, came hand-in-hand with westernisation. Thus into the complex melting pot of Taiwan’s hybrid identity (it had already been ruled by five different regimes in the past, including European settlers, the Qing Empire, the Japanese, and the Chinese Nationalists) was thrown the implicit cultural colonial power of outside influences, especially the US and Japan.

Ironically, the modernisation process caused friction with the official traditionalist stances of Taiwan’s conservative regime and its discourse of regaining an idealised Chinese mainland from the claws of the Communists. The children of the mainlanders who’d flocked to Taiwan, in order to flee Mao’s China in the late ’40s, knew of no other home but the island. Yet they were taught to cherish the never-seen mainland as some hallowed promised land they’d one day return to. No wonder Taiwan has so long harboured crises of cultural identity, rootlessness, and instability. In reaction to this, certain writers and artists in the 1960s and ’70s attempted to found a distinctly Taiwanese culture, embracing the local language over the officially decreed Mandarin (forcefully imposed as the national language) and the everyday stories of working-class life in Taiwan as opposed to the grandiose narratives of winning back China spouted in political rhetoric.

One such ‘nativist’ writer was Huang Chunming, whose literature, initially stifled by the regime, was deeply influential in creating a cultural and artistic sense of roots for Taiwan. For The Sandwich Man, the second omnibus film commissioned by the state-owned CMPC studio to give a rejuvenating boost to the Taiwan film industry (the first, In Our Time, I already wrote about here including a bit more background on Taiwanese Cinema), three of Huang’s short stories provided the source material, all set in the 1960s.

The first of the film’s three episodes, and the one which gives it its overall title, was directed by the filmmaker who’d go on to be the most acclaimed of all the Taiwanese directors, Hou Hsiao-Hsien. After his early romantic comedies for CMPC, this was a major shift into more serious filmmaking and the first step towards his status as the artistic driving force behind the Taiwanese new wave.

Almost entirely in Taiwanese dialect, Hou’s episode shines a light on those left behind by the economic boom. The titular character is an unemployed father and husband, desperately trying to drag his young family out of poverty and hunger. He begs for a job at the local cinema as a sandwich man, a human advertisement with boards straddled over his shoulders to draw the punters in, a marketing tactic he’s heard works well in Japan (a subtle hint at the theme of external cultural colonialism to be further developed in the next two segments).

Thus this man effectively humiliates himself, walking around in absurd clown make-up and (in a society where this matters a great deal) literally losing face, all while ineffectively trying to entice people to the local movie theatre. In the end, his boss at least recognises his determination and hires him to work on-site at the cinema, but by then comic irony strikes: his toddler son no longer recognises him without the clown outfit and cries until he dons it again.

Despite this seemingly sweet ending, there’s a lot of darker stuff at play in this short. Something irreversible has occurred by the end, with the father permanently scarred. His predicament functions as perfect metaphor for, as Jonathan Rosenbaum put it, “the problem that arises from pretending to be someone else temporarily and then finding that this temporary identity had become one’s main social identity”, i.e. the identity crisis faced by Taiwan itself. Taboo issues like abortion crop up, when the father questions the family’s financial ability to raise the second child the wife is pregnant with. In one brief, chilling moment when things are particularly grim, very much downplayed by Hou’s minimalist observational style, we even see the father perhaps contemplating killing his son because things are so bad. If this sounds dramatic, it is but Hou doesn’t let it play as such. His episode is the simplest and the most beautiful. For the first time in Taiwanese cinema, a film spoke to local audiences and said “look, this is also what being Taiwanese is”.

Zeng Zhuangxiang’s second episode is the least subtle of the three and probably the weakest, but its tonal shifts still make it an interesting oddity as well as a piquant social commentary. ‘Vicki’s Hat’ is about two bumbling travelling salesmen with Japanese pressure cookers to flog in a rural town.  The younger of the two takes a keen interest in the locale and in particular strikes a friendship with a local schoolgirl who never takes off her hat. This brief premise suffices to announce all the main themes here: the rise of consumer goods, the influence exerted by Japan, the relation between rural and city folk.

What makes this short film stand out though, and eventually fall down too, is its precarious tonal balancing-act. Part comic satire (technology goes amok when the salesmen attempt to demonstrate their cookers to bemused elderly villagers), part unlikely-friendship story with a hint of drama (the salesman becomes obsessed with finding out why the schoolgirl never removes her hat), it finally veers into anti-capitalist diatribe with a slightly over-the-top but still shocking ending, in which the elder salesman is brutally maimed by his own pressure cooker. Consumerism, advertising, sales slogans, all are revealed as shallow but alluring artifice, hiding a grittier reality, just like the schoolgirl’s hat. So much for the progress of the ‘economic miracle’, have a look at how things still are under the surface, Zeng’s episode says to us. 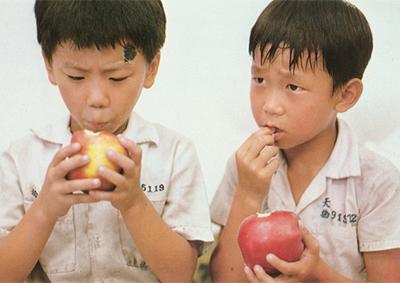 Finally, this mix-tape of Taiwanese tales ends with Wan Ren’s segment. ‘The Taste of Apples’, the funniest and most satirical, directly confronts the previously hinted-at topic of neo-colonialism. When an ordinary working-class Taiwanese labourer is injured by an American car, the US embassy is so eager to avoid any diplomatic tension with the island securing its Cold War strategic position in the Pacific, that everything is done to keep the victim happy. Initially baffled, he and his family are whisked to a hospital, promised compensation, offered a place in a US high school for their disabled daughter, and even given apples, a rare imported delicacy which they stare at in awe before daring to eat them.

Even if it has less darkness than the first two parts, both mood-wise and literally (most of it being set in an immaculate hospital with walls glaring in their overexposed whiteness), Wan Ren’s episode abounds with black humour, bittersweet pokes at Taiwanese backwardness in relation to their American ‘saviours’, and diplomatic machinations and fears raging in the background. But in the end this is a very obvious, and even angry, indictment of the forced hierarchical relationship with a dominant foreign power.

In a way The Sandwich Man is a bit like its title character, literally an advertisement for cinema, a showcase for a new breed of Taiwanese film, calling onto audiences to come see an authentically local type of cinema. This was cinema as a tool for national and local self-affirmation, in the face of cultural hegemony from the US (of course since then Hollywood has won the day but that’s another story) and backward-looking (or West-looking, obsessively towards the mainland), oppressive ideology. It won a landmark cultural victory, became part of a wider cultural wave which helped usher in the liberalisation and democratisation of Taiwan in the 1980s.

The CMPC bosses were unhappy with certain parts deemed ideologically suspect and wanted cuts to the film, especially to Wan Ren’s satire. This enraged the directors, as well as the younger more forward-minded elements working within the studio, who mobilised the sympathetic members of the press to launch a full-on attack against the conservative censorship of the state studio. Embarrassed by all the negative coverage, the studio backed down and let the film be shown to the public without cuts.

The film was a surprise box-office success domestically, perhaps partly due to the censorship furore, but more down to the fresh appeal of seeing on-screen the realities of life in Taiwan, with linguistic accuracy and previously taboo themes. Huang Chunming’s realist chronicling of the Taiwanese transition from rural to urban, tradition to modernity, had proved germane to this younger generation’s attitude in seeking a freshly Taiwanese perspective on cinema and in using the medium to deal with the conflicting forces at play on the island.

3 thoughts on “The Sandwich Man (Film)”