Part of the 1982 class to graduate from the Beijing Film Academy alongside the likes of Chen Kaige and Zhang Yimou, Ning Ying took longer to make her mark than her more prestigious classmates. After a spell studying in Rome, and a stint as Bertolucci’s AD on The Last Emperor, her own directorial career finally took off in the 1990s. I recently watched two films of hers, one a fiction and one a documentary, both highlighting her humanism and her wish to provide an outlook on contemporary China.

Dezi is a twenty-something Beijing cabbie, with the habit of using his taxi to pick up women. Recently divorced, emotionally immature, and unready for any serious commitment, he wanders from one short-term relationship to another. The women he meets (a depressive waitress burdened by her family, a student with materialist dreams of moving abroad…) fare no better in coaxing responsibility out of him than his ex-wife did. His is a lonely existence moored in urban disconnection; if there was a touch more nostalgic longing about him, he’d be right at home in a Wong Kar-wai movie.

This meandering character study, however, is an excuse for a portrait of the film’s true main protagonist: the city of Beijing itself. Through Dezi’s vehicle, Ning Ying has the perfect medium to navigate the capital. Its rapid transition into capitalist metropolis is glimpsed through ubiquitous construction sites outside the car windows. Despite his own alienation, the back of Dezi’s cab is taken up by all kinds of Beijing residents, from all walks of life. The camera often lingers on the backseat for various montages of Dezi’s passengers, including radio hosts, penniless migrant workers and restaurant employees revising an English-language speech for a group of presumably important foreign guests. (“We hope you love Beijing as much as you love our Peking duck” he recites to himself.) At bottom, the taxi is a metaphor for Dezi’s generation and the new Beijing, their increased mobility giving them a false sense of freedom yet only enabling the most superficial kind of human interaction.

Ning delivers flashes of style to this mosaic of modern Beijing. Nouvelle vague jump-cuts abound, adding an effervescence to otherwise long takes. There’s also a pulsating jazz-funk track scoring the driving scenes, adding real energy and momentum to the film’s portrayal of Beijing (for all its irony, the title can be taken on face value too, Ning clearly has fondness for Beijing). As for Dezi, his trajectory may have begun with a divorce, and ends with a second marriage, but his life is going round in circles, just like the newly constructed ring-roads he drives on. A shock dealt to him by the action of one of his ex-girlfriends might have roused him from his standstill, but it feels like little changes in him. The kite he once gave her, and which they flew on Tiananmen Square, is returned to him. It is a symbol of stunted hope, which cannot help but recall those lost hopes for a freer democratic China quashed in tragic circumstances on that same site. 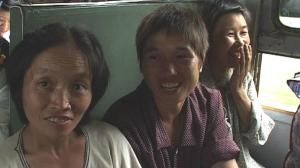 If Ning Ying shot a picture of the urban experience in I Love Beijing, she showed things from the other side of China’s urban-rural divide in her next film, Railroad of Hope. Every year, the growing inequities across the many regions of China causes the internal flow of millions of migrant workers. They leave behind hometowns and families in search of better employment opportunities and to then send money back home. These displacements are a perennial theme across Chinese history (I wrote a bit about this in my piece on A Touch of Sin), and Ning’s one-hour documentary neatly gives a micro-portrait of this wide-scale social phenomenon.

Hundreds of passengers queue up in Sichuan province, central China, to take a 3000km train journey to Xinjiang in the north-west. Xinjiang is more hospitable to agriculture, and more in need of workers, than mountainous Sichuan, so most travellers are heading for a few months of labour to boost familial revenue as best they can. Many have never been on a train before, or even ever left their villages. There’s a frantic rush as they desperately scramble to the platform in fear of missing the departure, and thereby wasting their pricey train ticket. It vaguely brings to mind the masses of dirt-poor peasants, living hand-to-mouth, arriving to Texas on trains in Malick’s Days of Heaven. Except that was in the 1910s while this is the 21st century.

Admittedly, it does feel more than a little uncomfortable watching the process of a camera filming these people, especially as a privileged ‘Westerner’ in comparison. There are a few moments that border on awkward voyeurism – a 14-year-old girl in tears as the camera operator asks her questions she’s barely interested in answering, for example. Your throat chokes up as some poor woman trips up over the weight of her bag while running on the platform. You feel bad for ever having complained about public transport rush-hour when you see these long-haul commuters climb in through windows, into overflowing carriages. The plainness of the questions asked at first seems intrusive, but eventually it all sinks in. Ning Ying’s documentary is simple, but it gives its subjects a platform and voice, and that is its beauty. Us outsiders looking in and feeling sorry or uncomfortable are not the point at all. The point is to get the women, men, and children in front of the lens to open up and talk, and the blunt questions perform that function. The candour is quite incredible, especially as the train starts off and the stress eases temporarily.

One woman tells of being duped into a marriage under the false pretense that she’d be offered work; she never was, but still remains with the husband who tricked her, purely because of the son they had together. One teenage boy goes from cheerful to teary, in a matter of seconds, when asked what his hopes for the future are – evidently a question he himself chooses not to think of. Another woman blankly states she’s not even sure what ‘happiness’ means when the voice behind camera asks her if she is happy. When asked why they go Xinjiang for hard work and little pay, the same answer recurs: for their children. Theirs are deferred lives, sacrificial and toiling through the motions in the hope they can hand down a better-off existence to the next generation. Being faced with their previously undocumented stories, from their own point of view, is a poignant experience.