Continuing my overview of the new releases I saw in 2018, here are my thoughts on two more films which just fail to make my eventual Best of 2018 list: a much anticipated sophomore film from Hungarian director László Nemes and a highly original dark fairy tale from Estonia. 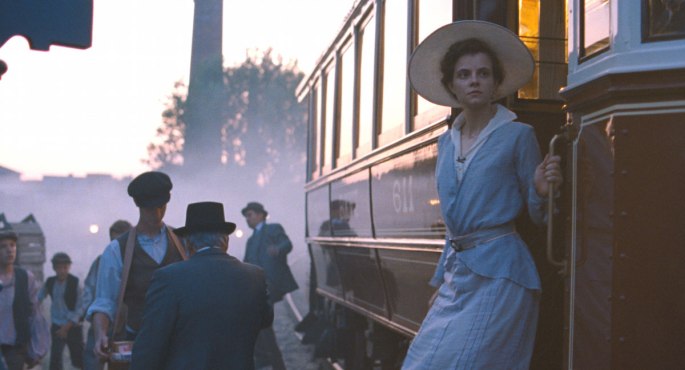 László Nemes’ second feature film as director, bound to be compared to his hugely impressive debut Son of Saul, once again deals with history: it begins in 1913, in a Budapest still part of the Austro-Hungarian Empire but in denial about the impending sense of doom hovering over it. It ends, without giving any spoilers, in the trenches of WW1. So it is about end of empire and history with a capital H, and we might expect a panoramic, omniscient view of events. Yet Sunset goes the completely opposite route. Nemes extends his stylistic ploy from Son of Saul and gives us only the very limited and often perplexed perspective of one character, Irisz Leiter — the camera constantly follows her, never veering too far from behind her shoulder, she is in every scene, and we are not privy to anything she does not see or hear.

Our guide Irisz (played with a suitable mix of confusion and curiosity by Juli Jakab) is a young woman who was orphaned as a toddler and is returning to Budapest to find work in the luxury hat store her parents founded and ran (it still bears the Leiter name), and which in the twenty years since her parents’ death has been run by a man named Oszkár Brill (played by Vlad Ivanov, the great Romanian actor whose calmly chilling disposition seems to transcend linguistic and national boundaries). Irisz, a talented hat designer in her own right, thus seeks not just a career but a reconnection with her roots, a sense of belonging. The Budapest she enters, however, is a murky, volatile world on very thin ice indeed and before she knows it she’s swooped into a web of secrets, intrigue and conspiracy that involves her long-lost brother, an underground of militant nationalist anarchists eager to bring down the Austrian overlords (after all this is only one year before Gavrilo Princip’s fateful acts in the not-far-away town of Sarajevo) and a human trafficking ring that may or may not go all the way to the top of the Empire’s pyramid.

Salacious stuff indeed, but all clouded with the opaqueness of Irisz’s subjective experience of things. Everything is ambiguous and unclear to her, since she is after all only a young woman, an outsider, a newcomer into events that go far beyond her, and so everything remains ambiguous and unclear to us too. Take for example Vlad Ivanov’s Brill, an ambivalent figure whom we are never quite sure what to make of; the film’s successful tone of mystery lies in our not quite knowing whether he is sympathetic or a villain. Of course, the technical brio is what truly makes this limited POV come to life. The recreation of turn-of-the-century Budapest and especially the look and texture of the image are dazzling. Brilliantly choreographed camerawork follows Irisz’s busy motions, sometimes from dark dusky interiors to blinding light outside all in the same take. Everything beyond Irisz’s vision is in shallow focus, blurred out of view. Shrill vibrating resonances on the soundtrack help sustain the mood of dread which Irisz increasingly feels. As we trail behind her, meet new mysterious faces with her, and are witness to her stubborn and courageous investigation, asking more questions than she can get answers to, the film almost takes on the feel of a first-person video game. 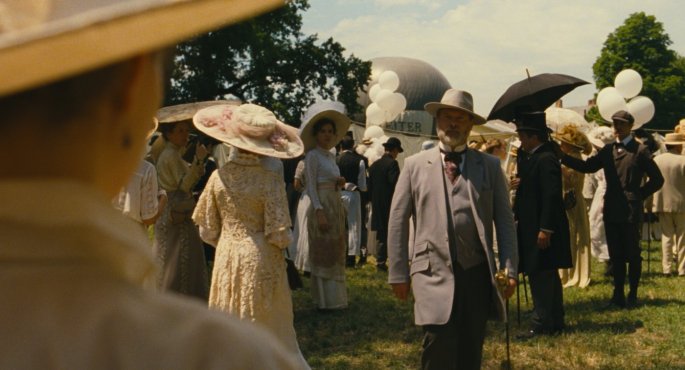 This may well be Nemes’ intention, but after a while (and it is a slightly long film) I couldn’t help but feel that, for all its technical mastery, this approach was in danger of becoming sterile. After the film ended, I had to ask myself why I did not find it as impressive an achievement overall as, say, Lucrecia Martel’s Zama (a very different film, yes, but also a descent into existential confusion filtered through one very partial perspective) or even Stanley Kubrick’s Eyes Wide Shut (a film which Sunset strangely resembles in its dream-like odyssey into a mysterious netherworld of conspiracy and prostitution rings). Nobody could claim artists like Martel or Kubrick lack seriousness, and yet in their films the most uncanny and strange moments of surreal or dark humour emerge from even unlikely places. With Nemes’ films, the problem, I think, comes from their being too po-faced, too lacking in tonal variety. This is a film without any moments of absurdism, or dreamlike strangeness, or surrealism, or humour. Naturally, for Son of Saul the ethical gravity of the situations presented and the sense of Saul’s loosening grip on sanity more than compensated for what in Sunset feels like a small blind spot.

All the same, Nemes is clearly a filmmaker of huge talent and one among a dying breed who is unashamedly modernist. At the end of the day, this is is a film attempting subjective realism, only including what Irisz can experience amid the chaos and confusion, rather than anything prepackaged by some omniscient narrator/film director, an approach to storytelling Nemes calls “arrogant”, as if one could ever know everything about any story. This lesson on the subjectivity of truth and perception seems both old-fashioned (since it goes back to modernist cinema and literature) and timely: all that we can know and think we know about what is around us is subjective, partial, incomplete. We should therefore be aware of this subjectivity and question everything we think we see/perceive more critically. In a world of neverending streams of competing media narratives, and in a Europe that seems as politically fraught as 100 years ago, Sunset proves as topical as it is historical. 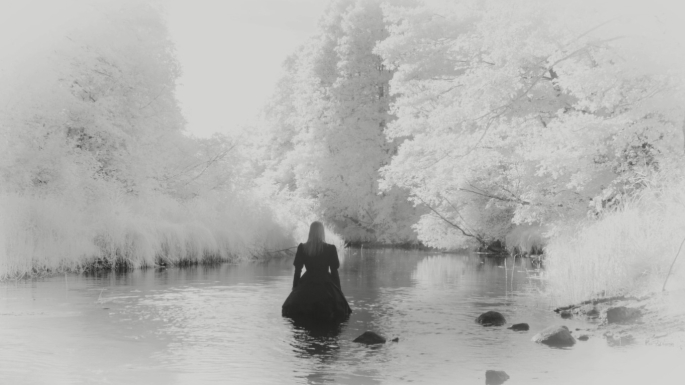 With its teenage girl protagonist able to channel her inner werewolf, its medieval setting where peasants oscillate between occult paganism and Christianity while being ruled over by German invaders, and its gorgeously dream-like black and white imagery, November immediately brings to mind another film, Frantisek Vlacil’s absolute masterpiece Marketa Lazarova (1967). Not a comparison from which most films come out favourably, but to its credit Rainer Sarnet’s fourth feature soon forges its own distinctive character. From the moment a curious automaton — seemingly cobbled together from household tools, and looking like what robots might have been if David Cronenberg was in the robot-designing business — swivels into frame and abducts a cow, we know we’re in for a weird ride. Every household owns one of these animate, talking object-hybrids (they are mythological creatures called kratt in Estonian folklore) who perform whatever tasks they’re ordered to, and are bewitched into existence by the Devil himself in exchange for the souls of the villagers. 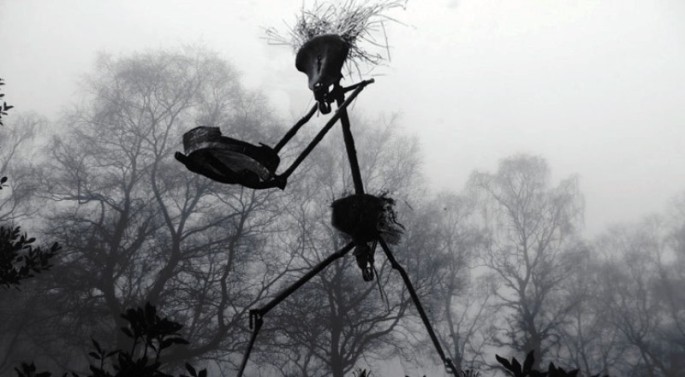 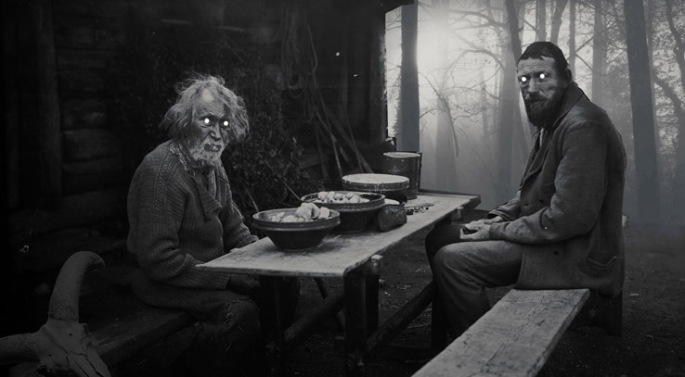 Within two of these villager families come our central characters, a star-crossed peasant boy and girl, he besotted with the local German baron’s daughter, she in unrequited love with him and forced towards witchcraft to win his heart. A love triangle isn’t the most original story, but this film’s main achievement is making us believe in the internal logic of its weird and magical world, by showing it off in dazzling beauty and taking its fantastic elements for granted, not allowing us the occasion to question them. However, it fails to make us deeply care about those living in this world, largely because all the craft and technique, the incredible cinematography and moody sound design, are diluted by an over-elaborate narrative packing too many different strands rather than anchored to a more streamlined plot.

In less than two hours of screentime we encounter episodes featuring the dead relatives of villagers coming back to life, the Black Death appearing in various manifestations, Faustian pacts and various attempts to sidestep them, a porcine oaf of a man who wants to buy the hand of the peasant girl (only adding to the urgency of her unrequited love), and underpants-stealing domestic servants. Oh and did I mention talking pitchforks, witches and werewolves? It all boils down to one hell of a dense, overflowing broth but November would remain worth seeing even only for its images and sounds, and bags more than a few whimsically memorable moments along the way — a melting snowman-kratt recounting the memories of the countless wonders he saw whilst in liquid form, an H2O version of Rutger Hauer’s famous Blade Runner monologue, is one of many worth mentioning.