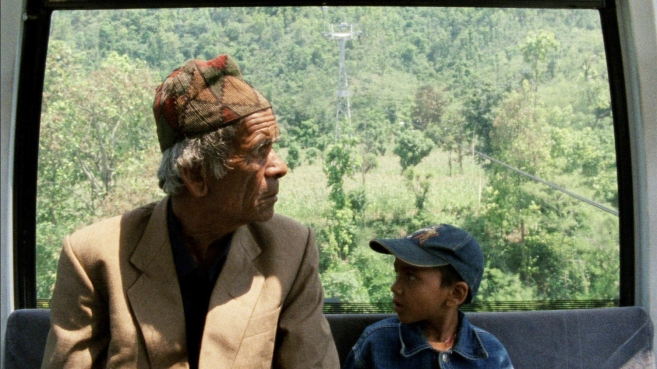 Manakamana is not a film for those used to the frantic pace of big-budget blockbusters. In fact, Stephanie Spray and Pacho Velez’s meditative and formally meticulous documentary announces itself as a sanctuary from, even an antidote against, those flashy action-packed low-attention-span movies.

Manakamana inhabits a different world, a world which it invites us into through 11 cable-car rides taking pilgrims and tourists to and from the mountain-top Hindu temple of Manakamana, Nepal. The premise is as simple and minimalist as it sounds; the camera never moves from the same spot in the cable-car and each ride is shown in real time, lasting just under nine minutes. Some of the pilgrims never utter a word, leaving us in quiet contemplation for the duration of their ride. One group consists of a trio of young Nepalese heavy metal aficionados. Another of three elderly ladies reminiscing about their trips to the temple as young girls, giving us an impression of how much things have changed since their youth.

The point here is to remain open to the experience of merely watching and taking in. This film is partly a rich testament to Nepal’s slow transition from tradition towards modernity. The sense of how much the temple and its local geography have changed is made clear as passengers casually comment on the new roads and houses being built in the surrounding hills, as well as the new cable-car itself. But it is also an invitation to slow down for a couple of hours and connect with what we see, with the people we gaze, and maybe try to imagine what their lives are like beyond the restricted frame of the film. One middle-aged couple childishly enjoy ice creams on the way back from temple, perhaps a pleasure they’ve enjoyed on temple visits since they were kids. The trio of rockers speak of a gig later the same day, giving a sense of the wider lives of these people beyond the unique spiritual experience of a pilgrimage.

In terms of cinematic technique, besides the transitions between rides and the sound design, it might be fair to say there won’t be much to impress here. But then that is also the point, of taking cinema back to its basics. Beyond that, there is plenty to suggest the filmmakers have thought hard about how to structure the eleven trips into a meaningful storyline arc. The fact each ride lasts as long as one reel of film, and that the window behind the cable-car passengers, giving us a glimpse of the splendid scenery, looks very much like a screen frame itself, only further suggests the ways Manakamana is making a self-conscious statement about the medium of film.

Manakamana is more proof that Harvard’s Sensory Ethnography Lab (SEL), the centre that produced it as well as several other recent films, is currently a breeding ground for some of the most innovative documentaries. After Verena Paravel and Lucien Castaing-Taylor’s Leviathan (the 2012 whaling doc that is, not Zvyagintsev’s 2014 Russian parable), the SEL’s formula of mixing ethnographic research with bold filmmaking has come up trumps again. All you need is to be ready to take a step into a more measured world for two or so hours.