The Hollywood auteur with total artistic freedom is a rare breed today, but Michael Mann’s unmistakable brand of film-making has established him as a super-auteur par excellence. It would take no more than two shots to instantly recognise a Mann movie. So pronounced is his style that it leaves no middle ground in responding to his work, it’s take it or leave it. Audiences either see superficially obsessive mannerisms, or they fall into the aficionados camp who see poetry through the surface veneer. This divide is not set to be mended by Blackhat, which doesn’t do what it suggests on the tin any more than Miami Vice (2006) did. Both give the appearance of big-budget action/crime films, but reveal a radical structure and a greater interest in carving out moods reflecting Mann’s vision of the modern world.

Mann could therefore hardly have picked more topical ‘modern world’ issues than the internet and trans-national cyber-security to continue this trend and put his stamp on. In an overture that’s all about process (typical of Mann, just think the opening of Thief), we are streamed right into the action with a hypnotic CGI sequence of digital information rushing though cables and circuitboards, eventually translated into the very real effects of a Chinese nuclear power plant explosion. This cyber-attack, with global ramifications, leads to a joint team of Chinese and American security units, with Captain Chen Dahai (Wang Leehom) and his sister Lien (Tang Wei) working in tandem with the FBI (represented here by a frequently scene-stealing Viola Davis and her prickly superior John Ortiz).

Sino-American tensions predictably flare up, especially when Dahai requests his ex-MIT roommate and genius hacker Nick Hathaway (Chris Hemsworth) be added to the team, since nobody knows the malignant code used for the attack better. The catch is, Nick’s in jail for hacking crimes, so the FBI begrudgingly make a deal for his help on the investigation. So far, so formulaic. But then this is archetypal Mann, and you just have to flow with it. The sheer momentum of the jet-setting cat-and-mouse game that follows, with Nick and the team always one step behind this mysterious blackhat hacker in a hunt that takes them from L.A. to Hong Kong to Macao and finally Jakarta, helps suspend disbelief and propel us into the experience Mann has created.

Mann is more interested in this experience of individual moments and moods, than plot or even characterisation. So the serial complaints about Thor Hemsworth playing a computer whiz, who reads the post-structuralist philosophy of Baudrillard and Foucault, miss the point. (Not to mention that many seem to forget real-life hacker Stephen Watt, a seven-foot-tall viking of a man with a bodybuilder physique, was the model for Nick’s character.) Nick may be characterised through broad strokes, but he is like all Mann protagonists, a solitary man with a great talent in one specific field and defined by what he does, by his actions and he has to be accepted as part of a long line of such characters. His existential quandary, as those of so many previous Mann creations, will involve a love interest, symbol of his effort to escape the orbit defining him.

Hence a scene that will be familiar to all who’ve seen a few Mann films. Nick, fresh out of jail, pauses to look longingly into the horizon at only he knows what, just like De Niro in Heat and Colin Farrell in Miami Vice before him, staring into the ocean. When Lien joins him in this brief moment of respite to touch him on the shoulder, this signifies she will share with him this impossible dream of escape, which their love will symbolise. Their affair will be a lonely drop of humanity, of hope, in a tech-dominated world they’re both trapped in. Here we get to why so many feel Mann is a successful poet of the modern world, weaving his characters into expressionist settings and environments, in the sense that the way the film depicts them are a reflection of the characters’ mental states.

The digital photography makes the most out of the formal, abstract qualities of the many glittering skyscrapers, making them look no different to the computer interiors in the CGI shots. Hostile technobabble sounds off in every direction, from RATs to programmable logic controllers, as the sleepless globetrotting manhunt hops from one metropolis to another through brisk editing. People and technology have morphed into one, in this shady reticular world where networks rule, where the intangibility of code parsing by invisible agents has drastic consequences which ripple in every direction.

Nick and Lien’s hopes of staying together mean they must always be on the run, a typical Mann paradox in a world of constant flux. His human characters have become satellites, orbiting around a hidden centre, but really stuck in the same situation. This is only enhanced by their circular manhunt, and even more so in the bursts of action, which suddenly switch to handheld camerawork full of kinetic energy and 180° axial rotations. There’s a shootout along a helical slope, slowly tracking down a Hong Kong storm drain, and a stupendous finale in the middle of an Indonesian festival parade. Here Nick, obstinately trying to retain a grip on the possibility of that impossible oasis, slips and slides in the opposite direction to on-rushing throngs of costumed marchers (which again remind of the lines of digital info in those CGI shots).

With its cool aesthetic and depiction of an entrapping world of inevitable motion and flux, it’s easy to see Blackhat as a loose sequel to Miami Vice. It is an extension of Mann’s concerns and artistic ideology, as well of his trademarks and obsessions. It’s pure Michael Mann, with all that implies; long-time fans will relish it and those unconverted, and perhaps expecting something more beholden to conventions of verisimilitude, won’t suddenly see the light with this one, as evidenced by the film’s commercial failure thus far. Has it suffered from being judged as what it superficially deigns to be? Probably, but Mann is a unique filmmaker, one of the rare few in Hollywood today who delivers a personal vision of how he sees the world, one which happens to resonate with many, and we should cherish new films signed by him whilst we still can. 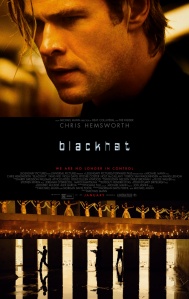