“Film is like a battleground. Love. Hate. Action. Violence. Death. In one word… emotion.”

“Ninety-five per cent of films are born of frustration, of self-despair, of ambition for survival, for money, for fattening bank accounts. Five per cent, maybe less, are made because a man has an idea, an idea which he must express.”

Traits: Known for sensationalistic and punchy style to be traced back to his formative years as a newspaper reporter, his films are direct, brash, attention-grabbing, raw, and never subtle — but undeniably intelligent and investigative. He examined key issues of US society, particularly racism and prejudice, as well as violence and American identity. His visual style is notably dynamic and energetic, employing plenty of camera movement. He was a maverick who treasured his independence, and most of his best films have the famed titles: ‘Written, Directed and Produced by Sam Fuller’.

Run of the Arrow

Palm Sunday, 1865, the final day of the Civil War. Rod Steiger is O’Meara, a Confederate soldier, bitter and veritably consumed by hate for the North, who cannot accept the turn events have taken. “I’ll hang before I pledge allegiance to that flag” he spits, like an extremist, to his mother, herself no fan of the Yankees and yet shocked by her son’s rhetoric. “Maybe a broken neck is the best treatment for what ails you”, she offers with regret. This is a disunited America, communities and families have been torn apart, and a larger nationwide fissure is cutting very deep (and a divided USA is as much an issue today as it was then, and as it was when Fuller made this).

O’Meara categorically decides that this new ‘United’ States taking form is no nation he wants to belong to, the prospect of Yankees up north dictating to him being more than he could ever swallow. So, in a more brashly political twist on the Western trope of the outsider vs. the community, O’Meara leaves and heads westwards, back then still largely uncharted territory, in search for a different American identity than the one he feels is being branded upon him. It’s a sort of prototype of the quest for identity to come a decade later in a lot of New Hollywood films (see for instance Five Easy Pieces).

Before long, he meets a Sioux, Walking Coyote, himself also a renegade from his tribe, a pariah in their eyes for having worked as a scout for the white settlers. The two men ride together, and O’Meara decides that here is an identity that could fit him. In the first of several terrific conversation scenes, each filmed by Fuller in two-shot long-takes rather than cutting back and forth between speakers, O’Meara announces “I want to be a Sioux”. To Walking Coyote’s surprise, he proves a very fast learner, picking up the language and the skills of a tracker.

But switching cultures is never such an easy process, and when they run into the local Sioux tribe, both renegades are considered enemies punishable by death. Still, they’re given a lifeline, a chance to play the game called ‘the run of the arrow’: the Sioux chief fires his bow, and the distance reached is the headstart the two men get in a chase of life and death. The ensuing pursuit is filmed with dynamism typical of Fuller’s economical set-piece bravado: he gets all the effect he wants by filming tracking shots of the feet of the men desperately running for their lives. Walking Coyote, old and weary, doesn’t make it, but O’Meara does and out of respect for his survival against the odds, the Sioux accept to take him in. 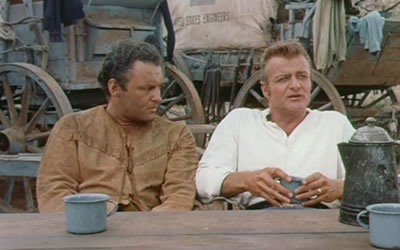 He joins their community, which among others includes Sara Montiel, who becomes his squaw, and a young Charles Bronson. O’Meara pledges allegiance: “My heart is with the Sioux people; the Sioux is my nation”. However, his identity is a complex, hybrid thing; he renounces his ties to the United States, but cannot let go of his Christian faith. And if the Sioux were forced into battle with the whites, would O’Meara be able and willing to kill fellow Christians in the name of the Sioux? These questions will come to be tested when a U.S. Army delegation, containing a hot-headed Custer-esque lieutenant eager to bring the Natives to heel, enter the picture intending to build a fort on Sioux lands.

Steiger certainly could be a very subtle performer (see e.g. The Pawnbroker) but here he is in full-on Method mode, at times mugging like Brando or James Dean. Apt then that O’Meara calls himself a rebel, because, like Dean’s in Rebel Without a Cause, Steiger’s acting feels not quite on the same wavelength as those of other, more conventionally trained members of the cast. His affectation of an Irish brogue perhaps deepens the character’s patchwork identity — a reminder in case we needed one that all non-Natives in the New World have relatively recent migrant roots — but is an acquired taste. And yet, though it may take a while to get used to as the film plays out, his performance works due to its very conspicuousness, for it is a maverick performance for a maverick character.

This is a film full of mavericks, determined to do things their own way, the aforementioned lieutenant being another example when he disobeys his superior’s orders by following his own belligerent instincts. Fuller himself was a proud original, who valued nothing more than the freedom of doing things his own way. And even the USA itself was born as a renegade, rebelliously declaring self-independence imprinted in its DNA. But here Fuller posits that there must be a compromise between outliers and the wider community, in order for the United States to function.

As usual, in the guise of a pulpy generic Western of forceful style, he conceals profound re-framings of the genre conventions (few ‘50s Westerns make us root for the Indians against the U.S. Army but the finale here does) and burning questions about identity, belonging, community, and whether you can really run the run of the arrow from these constants. Can Americans, like the Sioux in the film with their various tribes, be different but as one? If the US Civil War marked not the death of the South, but the birth of the Union, just what kind of identity and stability can that union have? These are questions Fuller leaves open with the final titles: “The end of this story can only be written by you!” — a story that is still far from any peaceful resolution as any recent look at U.S. current affairs can tell us. (March 2018)

One of the things that on paper ought to be a weakness in Fuller’s movies, but actually becomes a signature style that we come to love him for, is his fearlessness in biting way more than any 90-minute low-budget Hollywood film can chew. An interracial romance, a buddy movie about two police detectives driven apart by the corrosive effects of racism, a Los Angeles noir-ish murder mystery, and surprisingly (or perhaps not if you know Fuller) a tribute to the Japanese-American community, The Crimson Kimono is all of these. At various times it drops one of these to focus on something else, and other filmmakers might not get away with such slapdash, inconsistent structuring, but when it’s Fuller he makes it seem like the movie is simply as hungrily interested in as many diverse topics as he himself is.

Typically, we begin right in the thick of the action, a gunshot, an exotic dancer murdered, two cops on the case. Partners, friends, and Korean War vets, the pair is made up of Joe Kojaku (James Shigeta, given his greatest lead role in an ahead-of-its-time casting choice), a Japanese-American, and Charlie Bancroft (Glenn Corbett). Their only clue is a portrait of the victim in a crimson kimono, which may well have been commissioned by her murderer. Eventually they track down the artist behind it, Christine, a young painter who recalls having seen a man with her model that day and thus becomes the prime witness. At this point the investigation takes a backseat, and the movie transforms into a love triangle, both men falling in love with Christine.

The dynamics in this three-way relationship develop in unexpected ways, creating tensions more internal than external. For the first time Joe becomes conscious of his differing identity, and even when racism is not actually present in what is a healthy friendship based on mutual acceptance and courage, the tentacles of its all-pervasive paranoia reach everywhere. Racism is impossible to ignore simply because it exists. For this whole middle chunk, the movie is simply not interested in the murder whodunnit anymore — echoing an early line by Charlie chastising his overly diligent partner: “Take it easy Joe, nobody really cares who killed that dame”. But Fuller has in a way readied us for this change of tone, by taking the time to make the most of his on-location shooting and the diverse ethnic fabric of Los Angeles.

There’s detours through the art of Japanese doll-making, a Kendo tournament (which serves as an arena for Joe and Charlie’s tensions to bubble up), an emphatic shot pausing mid-plot on a war memorial for Nisei soldiers who fought in the Pacific and Korea. These and others — the intensely atmospheric Little Tokyo setting captured through gritty, noirish cinematography is another pleasure to be mentioned — are the kind of details that add to a plentifully Fulleresque movie, far transcending any budget or genre limitations. The murder mystery thread is picked up again eventually, in the most haphazard of ways, but by then Fuller has already made his preoccupations clear. It’s not quite the pulpy masterpiece that Shock Corridor would be, but it’s another powerful and unexpected treatment of the effect of prejudices and paranoia within American society. (March 2018) 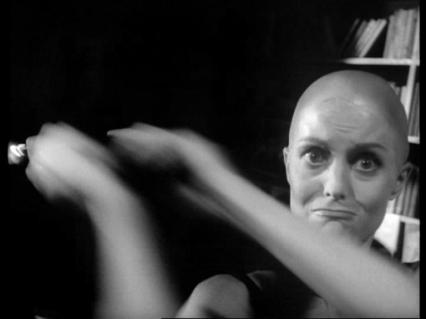 Written about in First Impressions # 1 here.