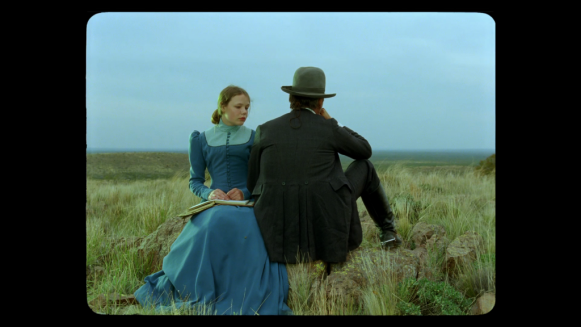 Since his 2001 feature debut Freedom, the Argentine filmmaker Lisandro Alonso has specialised in films broadly eschewing narrative content in favour of slow, drawn-out visual contemplation of characters and their relationship to the landscapes around them. This is certainly still true of his latest, Jauja, but (and this may not be saying much) it is also his most accessible film to date. There is a story of sorts and, for the first time in Alonso’s work, even a star actor in the shape of Viggo Mortensen, who spent time in Argentina as a boy and had been a long admirer of the Tarkovskyesque vibe of Alonso’s films.

Mortensen plays Dinesen, a Danish captain and engineer in 1880s Argentina, accompanied by his teenage daughter somewhere on the plains of Patagonia. Why exactly they are there is not quite clear. Perhaps Dinesen is helping the Argentine soldiers on their military campaign to win the local lands from the native indigenous tribes (the period known as ‘Conquest of the Desert’ in Argentina which still fuels debate and historical controversy to this day). Maybe he is on some personal expedition in search of the mythical lost land of Jauja described on the opening titles card, or he could just be a homesick Dane a long way from home. Or all of the above. In any case, what is abundantly clear is that his daughter is gathering plenty of attention from the lonely soldiers, much to Dinesen’s ire, and eventually she and a handsome convict from the army camp take quite a shine to each other. Before her father knows it the two have eloped together, triggering a frantic search.

This echo of the plot of The Searchers should already make it clear that this is a deconstructed western (the relationship between man and his surroundings is where Alonso and John Ford overlap). But it’s one that, slightly reminiscent of Miguel Gomes’ Tabu from 2012, seems to belie a particular fascination with silent cinema. There’s Mortensen himself who, although he has enough dialogue to show off his linguistic prowess in Danish and Spanish, gives a brilliant but largely wordless performance. And there’s the old-school Academy format (4:3 aspect ratio) with rounded corners, a type of frame rarely seen anymore, but only adding to the beauty of the painterly night-time campfires and Patagonian landscapes, which become more and more otherworldly as Dinesen’s search takes him into stranger territory, both physical and metaphysical.

No need to pretend otherwise, Lisandro Alonso’s new film is still not going to satisfy the bulk of mainstream audiences. It’s not hard to imagine many finding this film too slow, and even esoteric. But to those who prefer their cinematic experience of the odd variety, it offers plenty. The cinematography across this eccentric old-fashioned frame is controlled, disciplined. Alonso knows when to sweep the frame with slow pans to divulge the full extent of the horizons which dwarf the characters, and when to keep the camera static to accentuate the geometry of the compositions, and the wry deadpan humour. It may be well hidden, but there is something about Jauja that leaves it feeling never too far away from the comic absurdism of the worlds of Jarmusch or Kaurismaki. It is a baffling and mysterious gem of a movie, not unlike a dream in places, which with its tricksy narrative rabbit-holes of memory and time, will be poetically moving to some, utterly perplexing to others, or, perhaps best of all, both at the same time.