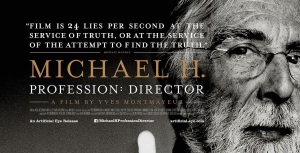 Yves Montmayeur’s documentary comes at at time when Michael Haneke seems to be at the peak of his powers and of his fame. The Austrian has cemented himself as the leading light of European auteurist cinema today and has even achieved minor mainstream cross-over success by winning an Oscar. So the moment is apt for a reappraisal of the man’s career so far (elsewhere on this blog I offer my own retrospective of Haneke’s career).

Michael H – Profession: Director begins with what is a very Haneke-esque trick, starting with a distressing clip from Benny’s Video and switching between levels of mediatised reality by going to a close-up of Haneke while the audio from the clip plays on. It sets the tone for a portrait of Haneke’s career, structured in a reverse chronology. We start with his latest, Amour, and go backwards, covering all Haneke’s feature films back to his 1989 debut, The Seventh Continent.

Apart from scenes of Haneke working on-set, scouting for locations, or in a class with his university students (all of which are interesting in their own right), Montmayeur’s film consists mostly of interviews, some of which are new and some of which have appeared elsewhere before. Many of the fine actors who have worked with him are here as talking heads, including Juliette Binoche, Isabelle Huppert and Jean-Louis Trintignant, and they eloquently provide a sense of the combined respect and tension that actors feel working with Haneke.

But the majority of the interviews are with the man himself. Haneke is sometimes a problematic interviewee, his by-now notorious obstinacy with questions pressurising him into giving some sort of interpretation of his own work – something he is loath to do and feels should be left to individual viewers – is in evidence at one point.  At times we see him trying to ‘direct’ his own interviews, a feature perhaps not surprising from a self-confessed control freak. But that need to be in charge of everything around him, paired with his rigorous perfectionism, is shown to be at the heart of his working method.

Passages like these do little to shed the persisting stereotype of Haneke as a cold, clinical and controlling director, but some moments show him in ways we’re not used to: his high-pitched giggle-like laugh is heard often, and there are occasional moments of Haneke being casual during filming, such as sharing a playful moment with a child actor on The White Ribbon’s set.

Like any documentary of this nature, Michael H has to find a difficult balance between being an introduction to Haneke novices (surely the best place to start for newcomers are Haneke’s films themselves anyway) and being so in-depth as to only appeal to those very familiar with his work and discourse. It arguably should not be watched by anyone yet to see Caché, as it includes a crucial scene from that film which would lessen its impact when they do watch it.

Its audience then is those who have seen at least some of Haneke’s films and want to know more about this most uncompromising of filmmakers. And for that purpose it is perfect – he gives many insights into his practical approach (“My films don’t emerge from imagination but from careful observation of reality”), and his philosophy of cinema (“Cinema needs images of accuracy rather than beauty”) . We also get a glimpse of what spurs him on to make films, when he discusses how they are a means of exploring his own fears and anxieties. But at the end the man, like his films, remains an ambiguous complexity, defying easy categorisation, which is just how he would have wanted it.