The Act of Killing

Let’s begin by saying The Act of Killing is a bizarre, disturbing, at times infuriating documentary exploring the genocide which took place in Indonesia in the mid-1960s, with a death toll ranging from 500,000 to over 2 million. What is novel here though, is that director Joshua Oppenheimer is filming not the victims’ perspective, but those who did the killing themselves, and 40 years on they speak candidly and in full disclosure about what they did. Why this lack of inhibition? Not because they are expressing some final repentance before the camera after having been charged as murderers. No, the twisted truth is these men were and are regarded as heroes for what they did and have continued to be part of the regime in power ever since the massacres. Such a subject matter requires a little context to shed some light on this unique film.

These turbulent times in 1960s Indonesia started with the tension between on one side the Indonesian Communist Party (the PKI, at that time the largest non-ruling communist party in the world) who were supported by the left-leaning president Sukarno, and on the other side the right-wing military led by General Suharto and backed by the CIA as part of the USA’s anti-communist stance in Southeast Asia. On September 30 1965, things escalated as six military leaders were assassinated, apparently by PKI members although this is still much disputed (some people will remember these events as the backdrop to Peter Weir’s The Year of Living Dangerously). In response Suharto and his troops went on a purge of vengeance, with funding and support from the United States, who urged them to crush the whole of the PKI. (It’s worth remembering that as the 4th largest population on Earth and with far more natural resources than Vietnam, Indonesia was seen as the biggest potential communist threat in Southeast Asia.)

Paramilitary squads made up of mostly small-time criminals were hired to rove Indonesia in search of people suspected to be PKI members or communist sympathisers (again according to many reports, the list of names to kill were supplied to Suharto and his group by the CIA) and eliminate them. And so countless suspected communists, left-wing intellectuals, people of Chinese ethnicity (deemed to have brought communism over in the first place…), landless farmers, and anyone with any sort of tie to the PKI were systematically attacked, tortured, raped, killed. History now shows the Lyndon Johnson administration was fully aware of the mass-murder going on, but nonetheless (Johnson being at best willfully blind on foreign policy, at worst a pawn in a global system of imperialistic exploitation) continued to support Suharto. Over the space of two years at least 500,000 murders were committed under the military’s orders, with many estimates going as high as 2 million deaths. President Sukarno lost power and was ousted by Suharto, who began his 30-year dictatorial reign in 1967. As Act of Killing shows, the same people with all this blood on their hands remain in charge of the country, and were neither brought to justice nor ever given reason to believe that they had done anything wrong.

The other interesting contextual question is how did Joshua Oppenheimer, an American documentarian and photojournalist, come to be making a film about this? Oppenheimer in fact was in Indonesia as a human rights activist, helping labourers fight for their rights. It was when he discovered their fear of the regime, and reluctance to form unions, that he first had his eyes opened to Indonesia’s past. Many of these struggling families were the children or friends of those murdered in the ’60s and have continued to have second-class rights. When Oppenheimer first had the idea of making a film about their plight, he soon realised they were far too scared to discuss their stories on camera. These people instead urged him to go interview those in the establishment, the politicians, generals and ex-gangsters who had been behind the killings, because they would be more than happy to talk and even brag about everything that had happened. So that is what Oppenheimer did, and over several years he filmed these men who indeed were ready to talk about everything on camera. But more than that (and this is what makes this film really unique), the men agreed to recreate their murderous actions as movie scenes, in order to show just how they did it, even starring and directing these scenes themselves.

This strategy is far from a gimmick, but is actually what makes this documentary fascinating beyond the macabre novelty factor of seeing mass-murderers talking on-screen, and I hope to explain why. Act of Killing follows the process of filming the reconstructions on sets or outdoors, mixed with scenes where the killers discuss their past or go about their daily lives. There are 3 main killers followed by the film, Adi, Herman and Anwar Congo. Adi is a family man who says he has zero complexes over his past, despite realising the anti-communist propaganda he was fed were lies. Herman is a rotund, rather slow thug, who at one point is pathetically seen running the most inept political campaign ever filmed – Herman wants to run for local election, as this will let him extract more protection money from those in his neighbourhood than he already does, but makes the tactical blunder of bribing his potential voters after the election rather than before… But mostly the film follows Anwar, a thin grey-haired man, once a small-time crook who also ran cinemas, and whose hatred of communists stemmed from their plans to ban American films, the most lucrative source of income for Anwar’s business at that time. We also learn that he has recurring nightmares, making him the only character coming anywhere close to displaying some sign of guilt.

Let’s state the obvious here, spending over 2 hours watching these men is neither an easy nor a comfortable task. These are men who have committed acts of utterly wanton disrespect to human life, unimaginable acts of mass murder, and speak openly and with pride of inventing techniques to kill as many as efficiently as possible, in order to keep up with an ever-increasing appetite for death. We see them in the present, bullying shop-owners into giving them money or coercing families into acting in their reconstructions, we watch them play golf, go bowling, sing merrily, and in one sickening moment we even see one reminisce nostalgically about raping his female victims. Constantly we are reminded that these men live not only in complete impunity, but actually gained in status and financially from their crimes. Indonesian leaders are seen socialising with and praising these killers who did the dirty work for them, and responding to claims that these men are gangsters, the politicians are quick to reply that the Indonesian word for gangster (“preman”) derives from the English “free man” and that free agents are beneficial to society. This is a painful reminder that history is written by the winners, and here a perversely corrupted regime of sadist killers were and are the winners, and in their official history exterminating the “communist threat” is nothing but an act of patriotic heroism deserving of gratitude.

Meanwhile, the 3 main killers/interviewees get immersed in the process of re-creating scenes of their genocidal acts, each in the style of a different genre: western, gangster film, musical… As surreal as some of them are, their purpose is actually to give a glimpse into their psyche, even without them knowing it. Oppenheimer’s great trick is to take a step back and let the camera give these men enough rope to figuratively hang themselves. One of the subtler scenes depicting how things continue to be in Indonesia involves one of Anwar’s neighbours, who has joined them on-set during the filming of a re-enactment. This neighbour had his father-in-law murdered and very timidly speaks up, telling of how, at age 12, he and his uncle found his father-in-law’s body on the street and buried it in a shallow grave. The man is so fearful of those around him that he concludes his moving first-hand testimony by assuring that he is “not complaining” in any way but only trying to help the actors get in the spirit of how things were like. The only reaction he gets from Anwar and Adi is disinterested dismissal, as everyone rejects his story for not being “relevant” to the scene they are reconstructing… 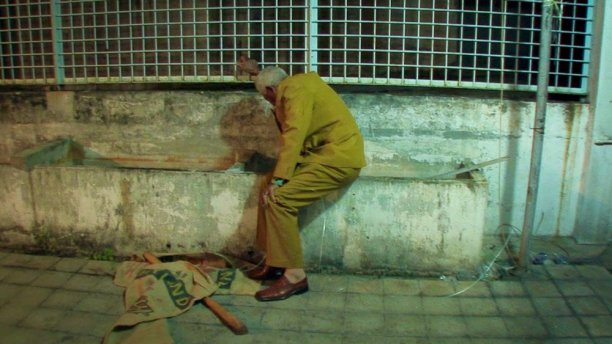 Besides showing how these men treat others, these scenes are primarily there to give insight into how they see themselves and how they wish to be seen. The word “act” in the title has double-meaning here, not only is it referring to these men’s actions but also to the possibility that there is an element of performance in these men already, even before the reconstructions. The implication is that to personally end thousands of lives and stay sane, they had to turn it into an act, a fiction justifying their crimes. In this way they remained at safe distance from their actions, dehumanising their victims, and lying to their own consciences so they can sleep at night. Fiction can be used to deny the most horrible parts of reality, and so the killers turning their murders into fiction before the camera, just as they already did in their minds, is very revealing. The role of fiction gains another dimension when we learn that the killers were themselves inspired by movies. Anwar describes turning to gangster films for new killing methods, and how they would watch musicals before the murders in order to be “in a good mood”. As an investigation into the mechanics of using escapism and storytelling as self-deception, and to replace horrors with fiction, the film is fascinating and becomes a metaphysical inquiry into the human conscience and how it lies to itself.

With Werner Herzog and Errol Morris jumping on board as executive producers, for no personal gain but to publicise the film, Act of Killing has already generated hefty momentum. In this instance it is fully warranted, the film is difficult but clearly important and as original a documentary as I’ve seen in a long time. Not only does it reveal dark truths about the nature of the human psyche, and its ability to justify acts of great evil to itself, but it also shows how history and the past are malleable and, they too, can always be re-invented through fiction. After all, as Oppenheimer has reminded in interviews, the CIA and US administration were directly involved in these killings from the start, and Western leaders like Thatcher and Reagan continued to support the dictator Suharto, so this historical amnesia involves more than just Indonesia. It is of course hard to watch this film, knowing that no-one will ever be charged for this genocide, no justice ever dealt for the families and friends of the murdered, and this further reminder that we live in a world full of pointless cruelty and inequity is painful. But finally this film getting the word out there is about as good as can be hoped for as an attempt to not let these massacres or these killers be forgotten.

6 thoughts on “The Act of Killing (Film)”