Directed by Charles Chauvel, and co-written with his wife and regular writing partner Elsa Chauvel, Jedda is a landmark film in Australian cinema history boasting several claims to fame. First Australian colour film, first Australian film in competition at Cannes, and crucially the first with Aboriginal actors in the lead roles.

The title character of Jedda (played by first-time actor and later political activist Rosalie Kunoth-Monks) is orphaned as a baby and adopted by Sarah McCann (Betty Suttor), the wife of a cattle station owner deep in the Australian Outback. Sarah, herself unable to conceive and leading a lonely existence, slowly becomes obsessed with what she sees as her mission to raise this little Aboriginal girl as a well-mannered, cultivated ‘white’ girl. Thus, Jedda is kept away from interacting as much as possible with her tribal peers and, as she gets older and begins to feel more of an urge to connect with her ancient land, is outright prevented from joining the other youths on the walkabout rite of passage. 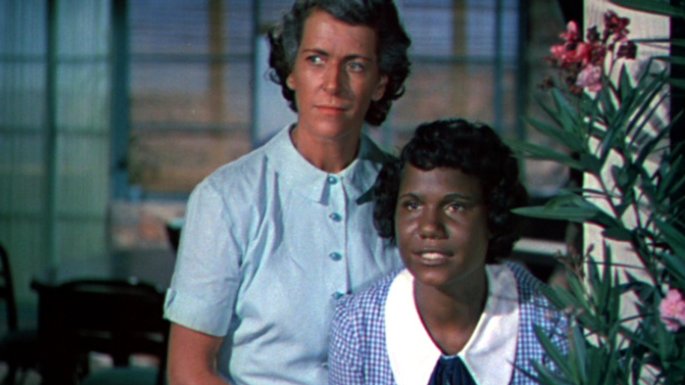 In one scene, Jedda’s mind wanders during her daily piano practice, as the sight of an ancestral shield decorating the wall conjures within her an almost primal response which is translated into her frenetic, frenzied banging of the piano keys. It is not a particularly subtle visualisation of a cultural hybrid, with one foot in two different camps and ‘belonging’ wholly to neither. It is no surprise then that her only close friend is the cattle stockman Joe (another non-actor Paul Reynall, unconvincing in blackface and clearly dubbed by an English voice), himself an Afghan-Aboriginal half-caste, and who is in love with Jedda whom he sees as his bride-to-be.

Joe’s hopes, however, are dashed when the conflict within Jedda materialises in the person of Marbuk (Robert Tudawali, also a first-time actor although a natural according to Chauvel’s personal accounts). Marbuk is a new worker at the cattle station, recently arrived from the Bush and still in tribal clothing, and whose intense gaze almost immediately focuses itself on Jedda, both frightened and perhaps somewhat excited by this man who represents the cultural identity she has been forced to repress. Marbuk though is no smooth lover, nor a patient worker waiting for the right time to marry Jedda; as we find out he is a murderer on the run. Before long, he kidnaps Jedda and runs away into the Bush with her, towards ironic and tragic consequences. The plot is the stuff of heightened melodrama, but if this is a love triangle there is one further character which sits as the apex of the film: the Australian landscape itself. The unrelenting desert, the stones of shimmering red, grottoes with tribal carvings, geological formations worthy of the cosmic mystery of Weir’s Picnic at Hanging Rock, crocodile-infested swamps; more than a thousand westerns could have been made in this Northern Territory locale, which is more than a match for John Ford’s Monument valley. Yet, its epic unknowability is clearly framed by Chauvel to boost the film’s market potential, beginning a long tradition of Australia’s natural uniqueness as being its novelty factor for international audiences.

Chauvel was a pioneer Australian film artist who almost single-handedly kept Australian cinema alive at a time when there was no film industry to speak of amidst the flooding of Hollywood exports post-WW2. But he was also a canny operator, the discoverer of Errol Flynn, the chronicler of Australia, and proud exhibitor of its landscapes, which in Jedda are often showcased as if in a travelogue. No wonder then that Chauvel’s next and final project after this was a BBC travel series called Walkabout (no relation to Nicolas Roeg’s film of the same name), showing how the cultural transaction between Australian filmmakers and overseas audiences was already based on a desire to see the weird and wild side of the land down under (that Jedda’s international title was Jedda the Uncivilised also attests to this exotic appeal).

Finally, more than the exoticism, it is the politics of cultural representation that looms over this film’s problematic elements by today’s standards. Even the character voicing the most ‘progressive’ opinions by curbing Sarah’s wrong-headed obsession of nurture-over-nature and reminding her that Aboriginals have a millennia-old culture and connection to their land, Douglas McCann (George Simpson-Lyttle), Sarah’s husband and the owner of the cattle station, veers into what for today would be highly politically incorrect language. And yet one must remember that this film was at least a first step towards airing very serious issues at the core of Australia’s identity as a nation-state. In the 1950s, when Chauvel made this film, not only was it an ambitious and almost crazy idea to have two Aboriginal non-actors be centre stage, it was also a time when the assimilationist policies of the ‘Stolen Generations’ era was in full flow.

Jedda cannot and does not explicitly refer to this cruelly racist state policy — that would need to wait until Philip Noyce’s Rabbit-Proof Fence and others to receive overt coverage in mainstream Australian cinema. But it is clearly a seminal film in its ambivalent thematic rendering of cultural hybridity. Its most flawed performance, that of Paul Reynall as Joe, wooden and weakly scripted as if the blackface wasn’t off-putting enough, intriguingly belongs to the character who narrates the film; it is Joe’s story, his telling and remembering of the tragedy that occurred as perhaps a warning for future generations. Flawed and often technically lacking as it may be, Jedda nonetheless strikes memorable moments as melodrama, not least the tragic finale itself, and as a key text with remarkable similarities to John Ford’s The Searchers (in its themes and its narrative of a girl kidnapped by an Indigenous native) it undoubtedly has its place as a work to be studied carefully and critically in its own context. Its legacy can be noticed in its continued dialogue with modern Australian cinema, Warwick Thornton’s Sweet Country being one instance of a revision and update of Jedda’s essential premise of two Aboriginal runaways pursued by white settlers in the Outback.