Andrey Tarkovsky once said “Cinema is sculpting in time”, reminding us that time, by giving motion to images, is the dimension differentiating cinema from other visual arts. Films can manipulate time, speed it up, slow it down, go backwards and forwards, join together shots recorded days if not years apart, make time feel faster or heavier through tempo, editing, shot duration. This plasticity of the film medium means it can cheat the tyrannical irreversibility of time, even cheat death by reviving actors long deceased onto our screens. A film makes us live through its time, watching the process of the ephemeral present becoming the past, before our very eyes. Cinema in some way has tamed time (“In cinema, memory is the slave” – Godard). In a sense, what the Impressionists and Post-Impressionists did to how we see and perceive light and colour through painting, the medium of film has done to how we experience time.

The philosopher Gilles Deleuze defined the difference between classical and modern cinema as the evolution of cinema’s power to articulate time. Time in classical cinema was time of action: an event occurring and then another in a cause-and-effect chain. But, says Deleuze, in modern cinema time stands before us in its purest state, in the way we think, feel, experience it: modern films manage to convey the mental formation of time. When fishing for examples, it soon becomes tempting to say that some of the most invigorating uses of cinematic time in modern cinema have come from Asia. We can think back to Ozu and his ‘pillow shots’ – nothing other than time in its purest form, breaths of air in between scenes. But fast-forward to the last 20-30 years and Asian cinema has continued to have a fascinating relationship with time, perhaps because of their societies’ own breakneck modernisation process, in direct conflict with long-standing traditions of serenity and tranquillity.

Wong, assisted by his trusty cameraman Chris Doyle, has created a distilled experience of relative temporality, of time lurching or speeding, depending on mood. Chungking Express is full of these manipulations of time via the manipulation of film-speed, slowing down or accelerating the action, or in this scene creating the effect of both at the same time. In fact, it was achieved by having Leung perform his gestures extra-slowly, then later speeding up this footage, so he appears to move at normal pace while those behind him are a sped-up blur. The whole of Chungking Express is about the attempts of these individual nodes of time to connect within this massive metropolitan network. But independent time-zones still always remain out of sync.

Another way in which cinema plays with time is by delving into the past and excavating history and memory. Typically, representations of the past are seen through traces it has left in the present, with emphasis on key figures and big historical markers, to immediately evoke the sense of whichever period to the audience. But, in Taiwan in the late 1980s and early 1990s, Hou Hsiao-Hsien made historical films espousing a totally different philosophy of history, one that embraces what we could call the outtakes of history. There, every ordinary and historically “insignificant” person, and every little incident, matters and adds up to a greater overall portrait of a historical context.

Nowhere is Hou’s approach to history more clearly crystallised than in the final scene of The Puppetmaster (1993), a film which covers 50 years of Japanese colonialist rule over Taiwan, and ends on the final day of WW2. In terms of Big History, this is as big as it gets, with especially massive ramifications for Taiwan, which will now be free of their Japanese overlords and return to Chinese jurisdiction. But how does Hou depict this momentous day in his final scene? With battle scenes? With Emperor Hirohito announcing defeat? With politicians signing peace treaties? No. With a landscape-engulfed, extreme long-shot of prosaic rural existence, which could be any other day. In the background, Japanese planes are being dismantled for scrap metal, symbolising the end of WW2 and a half-century of Japanese rule. But in the mid-ground life goes on, it’s just a day like any other for the ploughman and his ox crossing the frame (squint to just about see them in my poor quality screenshot). Mixed into this one shot is a reversal of, and reunion between, the political vs. the personal, macro-history vs. micro-history, official history vs. counter-history.

This final shot reminds me of Pieter Bruegel the Elder’s Landscape with the Fall of Icarus, where here too centre-stage is taken by the modest character of a ploughman plodding his ox-cart along. And if you blink you’ll miss the big occasion hinted at in the title. Where is Icarus in the painting? It takes a while to spot the tiny splash caused by a pair of legs in the sea. This is a way of bringing so-called Big History back to its roots, back to the common people forgotten and overshadowed by grand narratives about massive events and heroic individuals. These two ploughmen may be present on days of momentous occasions, but their lives go on, unaffected. Bruegel, just like Hou’s historical film, was dealing with oppression by a colonialist power, in his case the Spanish on the Dutch, in Hou’s case the Japanese on the Taiwanese. In both cases it’s a reminder that time does not discriminate: History is what happens when day-to-day life keeps ticking by. 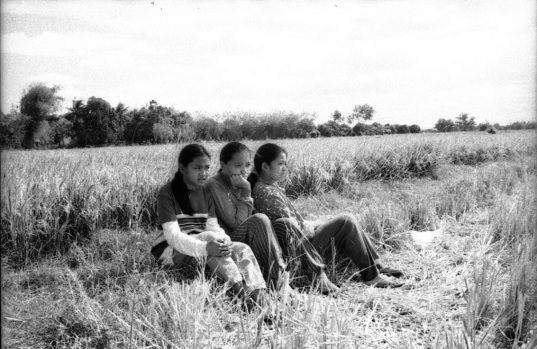 Film plays out in time, so the time lived by the spectator as they watch are an inextricable part of the films themselves. One case in point is Herz Frank’s 1978 film Ten Minutes Older, in which one ten-minute shot focuses on one boy’s changing expressions as he watches a film inside a cinema. We age ten minutes while watching him watch, just as the child in the film does every time. True to Tarkovsky’s dictum, those ten minutes take on a physical dimension, materialised by the act of watching the film. The weight of time can be further loaded by making takes last longer than required. Hence the well-known joke about Theo Angelopoulos (applicable to quite a few other directors): When one of his films starts you check your watch and it says six o’clock. Three hours later, you check again and it says five past six.

The Filipino Lav Diaz is another who ‘sculpts with time’, sometimes stretching film duration to its limits. We’re used to films of around 100 minutes long, but there’s no sacred decree that it must be so. Watching Diaz’s films instead demands a certain commitment and stamina, whether it’s in one sitting or multiple parts – viewing and experiencing these films forces you to give your time to them. And quite a fair bit of time too … Death in the Land of Encantos (2007) is 9 hours long, From What is Before (2014) is 6 hours, Lullaby to the Sorrowful Mystery lasts 8 hours, and his epic Evolution of a Filipino Family is almost 10 hours long. Norte the End of History (2013) and his latest The Woman Who Left, which just won the Golden Lion at Venice, seem like mere breezes in comparison at 4 hours each.

Like Hou Hsiao-Hsien, Diaz is keenly interested in national memory, and Evolution of a Filipino Family spans 16 years (1971-1987) of brutal martial law under the Marcos dictatorship, seen through the fates of one family. The process of making the film was itself a stretch of time. Diaz, funding his own film by working as a waiter in NYC, took nine years to complete it, in which time actors changed, grew, and some even died. It was a sort of Boyhood before Boyhood, and watching it is like flipping the pages of a family photo album. In terms of pure plot content, what happens to the family would not be out of place in some of the melodramas Filipino audiences are used to.

But the difference is time: Diaz has 10 hours to play with, and he can space the plot action apart, stretch the narrative structure of his film like an elastic sheet. In between significant events, then, there’s seemingly ‘dead time’, in which people just do ordinary things: eat, fish, farm, laze languorously. It’s a specific concept of time, a specific outlook on living, and it makes for a unique method of telling a heart-breaking family saga. Films like Diaz’s can not only slow us down into meditative states, but also reinvent our expectations of cinematic time. A sort of time-pressure is felt, and, invisible though it is, it becomes a physical presence, a dimension that we feel. How apt that, as Diaz points out in interviews, the root word for time in his language originally meant ‘governed by space’.